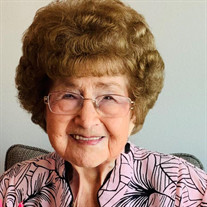 Ali Fae Wright, 100, entered her Lord and Savior's arms on Thursday, March 18th, 2021. On January 17th, 1921, Ali Fae was born in Charleston, Texas, to Grover George and Maggie Layer George. Ali Fae grew up in Charleston, Texas, with her five siblings. After graduating valedictorian, she married Marshall (Jiggs) Wright in 1939. Ali Fae became a beautician and earned her license in 1940. She and Marshall joined the First United Methodist Church, where they raised their four children and enriched the community of Weslaco. Ali Fae was a very social person. She loved helping others, and her beauty shop clients became her best friends. Ali Fae held her beautician license for 80 years. She was a blessing to our community and was selfless and generous. She was a member of the First United Methodist Church for over 75 years and an active member of the United Methodist Women's group. Ali Fae was known for her love of working in the beauty shop. She worked until she was 98 years old and was passionate about making her clients, whom she always referred to as friends, look beautiful. When Ali Fae wasn't working at her shop, she was volunteering somewhere. She was a member of various ministries at First United Methodist Church where she was active in congregational care, the friendship bible class, and her most known role as a greeter on Sunday mornings. You would be greeted with a welcoming smile and warm hug. Strangers quickly became lifelong friends and looked forward to next Sunday's warm hug. Ali Fae was also an active member of the Order of Eastern Star for many years and P.E.O. (an organization that promotes women's advancement). She held a lifetime endowment in the Order of the Eastern Star Weslaco Chapter #772 after being a devoted member for 50 years. Ali Fae was named Weslaco's First Lady in 1972, and she and her family were recognized in the Weslaco 100 centennial celebration, being named one of Weslaco's pioneer families. She was also honored by the Senate of Texas for her many contributions to the Weslaco community by proclaiming her as a treasured citizen of the state and made October 6th Ali Fae day. Ali Fae enjoyed decorating, reading, studying genealogy, spending time with family, and cooking. She would wake up very early in the morning to make sure her children had a home-cooked meal while she was working. Ali Fae was a hard worker and never left an ounce of daylight unused. She was loving, caring, and a cherished friend by all who had the privilege of knowing her. Ali Fae is preceded in death by her parents, Grover and Maggie George, husband,Marshall (Jiggs)Wright, sons, Wesley Wright and Simmey Wright, grandchildren, Benjamin, Lynn Carol, and David Wright. She is survived by her son, Rickey Wright of Live Oak, Texas, daughter, Brenda Foerster (Jamie) of Weslaco, grandchildren, Steve Wright (Kelly), Sarah Wright, Luke Wright (Christine), Aharon Wright (Kaelin), Joshua Wright, Brittaney Lopez (Alex), Cody Foerster, Shelbi Foerster, Lauri Beach, Steven Wright, Leslie Ozuna(Bobby+), great-grandchildren, Asher, Noah, Anslie, and Raelie Wright, Kade, Brode, Jace, and Riley Lopez. Sydney O'Conner (Rory), Cheyenne Beach, Emily and Hunter Wright, Bobby and Samantha Ozuna, and great-great-grandchild Cyrus O'Conner. Visitation will be Wednesday, March 24th, 4-7 pm at McCaleb Funeral Home. A celebration of life will be Thursday, March 25th, 10am, at First United Methodist Church in Weslaco, officiated by Pastor Kay Hooper. Burial will follow at Highland Memorial Park in Weslaco.

The family of Ali Fae Wright created this Life Tributes page to make it easy to share your memories.

Send flowers to the Wright family.