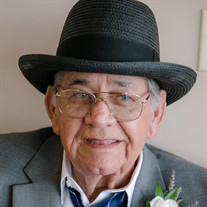 Weslaco- Arnoldo Gonzalez Garza Sr., 78, entered his eternal resting place on Tuesday, February 26th, 2020. Arnoldo was born in Edinburg to Luciano Rios Garza and Basilia Gonzalez Garza. He was the youngest of seven children, and they grew up in Weslaco. Arnoldo was often called “Borado” by family and friends because of his blue/green eyes, which everyone admired. It might have been his eyes that attracted Petra Rodriguez to him in 1957 when they met at a dance in Pharr. Arnoldo and Petra were married in 1961 and decided to make a move to Illinois. Arnoldo was a bit of an entrepreneur and became a barber at a young age. He owned a barbershop for many years. He then became the Director of Maintenance at Mt. Prospect Public Library, where he worked for ten years. Arnoldo and Petra were tired of the cold weather and came back to the valley in 1977, settling in Weslaco. Arnoldo worked as a truck driver for HEB and the Rio Grande Sugar Mill for many years until he retired. Arnoldo loved sports and gambling, mainly because it allowed him the opportunity to spend time with friends. He always had a good joke and a great sense of humor. By far, most important to Arnoldo was his family. He loved to spend time with Petra, his children, and grandchildren. Arnoldo is preceded in death by his parents, Luciano and Basilia Garza, Cayetano “Tano” Garza, Ramiro Garza (Oralia), Concepcíon Garza, Luisa Hernandez (Amado), and his sister in law, Anita Sánchez Garza. He is survived by his loving wife of fifty-nine years, Petra, children, Becky Elenez (Emiliano) of Dallas, Carmen Garza of Houston, Arnold Garza Jr. (Esmer) of Austin, Danny Garza (Anne) of Southlake, Wally Garza of Weslaco, and Vince Garza of Weslaco, grandchildren, Joseph Elenez (Karen), Candace Hankins (Tommy), Oscar Enriquez (Mayra Cano), Jessica Enriquez, Angelina Garcia, Aprill Garza (Stephen Shivley), Amanda, Ava, Austin, Eric, and Alex Garza, great-grandchildren, Mila Elenez, Petra, Axel, and Jet Shivley, and Noah Enriquez. Also surviving are brother, Luciano "Hector" Garza Jr., sister, Hortencia Robles, and sister-in-law, Tita Garza. Visitation will be Friday, February 28th, 3-9 pm, at McCaleb Funeral Home in Weslaco, with a Holy Rosary at 7 pm. Mass will be celebrated Saturday, February 29th, at 10 am, at San Martin de Porres Catholic Church in Weslaco. Burial will follow at Sacred Park Cemetery in Mercedes. Serving as pallbearers will be Alex, Eric, and Austin Garza, Joseph Elenez, Oscar Enriquez, Stephen Shivley, and Tommy Hankins.

Weslaco- Arnoldo Gonzalez Garza Sr., 78, entered his eternal resting place on Tuesday, February 26th, 2020. Arnoldo was born in Edinburg to Luciano Rios Garza and Basilia Gonzalez Garza. He was the youngest of seven children, and they grew up... View Obituary & Service Information

The family of Arnoldo Gonzalez Garza created this Life Tributes page to make it easy to share your memories.