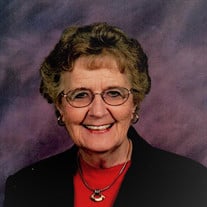 Audrey was born to Martin and Beda Egerstrom in Kerkhoven, Minnesota on January 8, 1925. She was the youngest of five children. Her older siblings were Inez, Lester, Ardell, and Paul. The family moved to the Rose Hill farm north of Murdock when Audrey was six months old. Audrey lived there for 18 years. She loved her puppies and enjoyed playing with her older sister and brothers. She was active in 4-H. During her high school years, she was in school plays and speech contests. She graduated from Murdock High School in 1943 as valedictorian. She attended Gustavus Adolphus College in St. Peter, Minnesota and graduated with a bachelor’s degree in education in June of 1945. Audrey’s first teaching job was in Howard Lake, Minnesota. She taught business classes there for two years. Audrey was married to Ken Peterson on June 14, 1947 at Calvary Lutheran Church in Murdock. She taught English and business at Kerkhoven High School for two years. Following those two years, she continued to do substitute and homebound teaching. On February 10, 1951, she gave birth to Renee.’ A few years later, on March 6, 1955, a son Dean was born. The Peterson family enjoyed camping at Sibley State Park as well as at the Boy Scout Camp. Most of their family traveling was to telephone conventions all over the United States. While living in Kerkhoven for 61 years Audrey was an active member of Bethel Baptist Church. She was involved in Ladies Missionary Society and was a Sunday School and Vacation Bible School teacher for many years. She was also active in the community as a member of the KIP (Knowledge Is Power) Study Club and the homemaker’s group. Audrey had a phenomenal memory and enjoyed learning where people lived. She knew someone in almost every town in Minnesota and loved making connections with new people she met. Even into her nineties Audrey was very verbal, spunky, enjoyed playing games, and loved to chat with her caregivers. Starting in 1983 the Petersons spent their winters in Weslaco, Texas at Lakeview Mobile Home Park and later at John Knox Village. In 2008 they sold their home in Kerkhoven and moved to Texas permanently. In Texas they were active members of First Baptist Church in Weslaco. In the fall of 2017 Ken and Audrey both moved into the Medical Center at John Knox Village as they both had dementia and needed full time care. While living in the Medical Center, Audrey has been unable to travel to Minnesota, so her children have been visiting her in Texas. Audrey was promoted to her eternal home on August 10, 2020. Audrey was preceded in death by her parents: Martin and Beda Egerstrom; husband: Kenneth Peterson; sister: Inez Egerstrom; brothers: Lester (Ginny) Egerstrom, Ardell (Louise) Egerstrom, and Paul (Marilyn) Egerstrom. Audrey is survived by children: Renee’ (Glenn) Larsen from Grand Marais, Minnesota and Dean (Betsy) Peterson from Glenwood, Minnesota; five granddaughters: Holly (Ben) Hilty, Heather (Mike) Vedders, Heidi (Mitch) Vedders, Rachelle Peterson, and Alissa Peterson; 11 great grandchildren: Elsie, Rylee, Kinsley, (children of Mitchel and Heidi Vedders), Jedidiah, Maridee, Levi, and Evie (children of Michael and Heather Vedders), Aliyah, Michael, Layla, and Livia (children of Alissa Peterson). A memorial service is scheduled for August 28, 2020 10:00AM at Pillsbury Park in Kerkhoven Mn. Everyone is asked to bring a sitting chair and a mask to wear.

Audrey was born to Martin and Beda Egerstrom in Kerkhoven, Minnesota on January 8, 1925. She was the youngest of five children. Her older siblings were Inez, Lester, Ardell, and Paul. The family moved to the Rose Hill farm north of Murdock when... View Obituary & Service Information

The family of Audrey Peterson created this Life Tributes page to make it easy to share your memories.

Audrey was born to Martin and Beda Egerstrom in Kerkhoven, Minnesota...