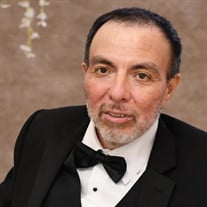 Weslaco: On November 15, 2021, Baltazar Cerda Jr., 48, passed away after a courageous battle with cancer at his home in Weslaco. On September 18, 1973, Baltazar was born to Baltazar Cerda Sr. and Cynthia Ortiz in Weslaco, Texas. Baltazar grew up in Weslaco and played football for the Weslaco Panthers. After graduating from high school, Baltazar joined the United States Army, where he served his country eleven years, earning numerous service medals. Baltazar served in the Iraqi Freedom War and achieved the rank of Army Specialist. After being honorably discharged in 2005, Baltazar returned to Weslaco and began a career in nursing. Baltazar was passionate and cared for his patients with all of his heart. Baltazar met Melissa Zepeda in 2009, and they had two daughters together, Katarina "Kat" Zepeda-Cerda and Kristiana Zepeda-Cerda, who were the loves of his life. Becoming a father was a pivotal moment in Baltazar's life. He was a devout father, and his entire life revolved around his girls. Baltazar took both the girls to school most days. After being diagnosed with cancer in 2019, he continued to work to do everything possible for his girls. Baltazar also continued to work his nursing shifts until his body could no longer keep up with his dedication to his patients. Baltazar was so proud to take Kat to softball practices and events. When Kristiana came along, she added just the right recipe for true happiness for Baltazar. The two were inseparable, and he referred to Kristiana as his little twin because their personalities were so similar, both jokesters. Baltazar's daughters truly made his life complete. Baltazar also loved his Dallas Cowboys, Marvel or DC comics, Star Wars, and his secret love, The Twilight Series. He enjoyed 80s music. Michael Jackson was a favorite, and Baltazar always tried to show off his dance moves to his girls. He was a kid at heart. Baltazar was a devout Catholic. He attended mass at St. Joan of Arc with his grandparents, where he received all of his sacraments. He was funny and lit up any boring event with a clever joke. Baltazar was always a penny pincher, teaching his girls about what responsibilities lay ahead for them. Baltazar was strong and a true example of a warrior. Baltazar is preceded in death by his maternal grandparents, Victor Sr. and Guadalupe Ortiz. He is survived by his wife, Melissa Zepeda-Cerda, daughters, Katarina and Kristiana Zepeda-Cerda, paternal grandmother, Margarita Cerda, mother, Cynthia Ortiz, father and stepmother, Baltazar Sr. and Yolanda Cerda, sisters, Veronica Mills (Mike), Vanessa Cerda, Valeria Cerda, Gloria Garcia Knight (Dustin), Christina Garcia (Candelario), brothers, Ivan Cerda and Peter Cantu, father and mother in law, George and Celia Zepeda, and numerous nieces and nephew, of whom he was so proud. Visitation will be Sunday, November 21st, 1-9 pm, and Monday, November 22nd, 9 am-9 pm, with a rosary at 7 pm, at McCaleb Funeral Home. Mass will be celebrated Tuesday, November 23rd, 9 am, at St. Joan of Arc Catholic Church in Weslaco, followed by burial with full military honors at Rio Grande Veterans State Cemetery in Mission.

Weslaco: On November 15, 2021, Baltazar Cerda Jr., 48, passed away after a courageous battle with cancer at his home in Weslaco. On September 18, 1973, Baltazar was born to Baltazar Cerda Sr. and Cynthia Ortiz in Weslaco, Texas. Baltazar grew... View Obituary & Service Information

The family of Baltazar Cerda Jr. created this Life Tributes page to make it easy to share your memories.

Send flowers to the Cerda family.