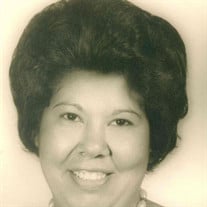 Weslaco: Celia Rivas, 81, passed away on Wednesday, December 9th, 2021, at Valley Baptist Medical Center in Harlingen, after a courageous battle with pulmonary fibrosis. Celia was born on August 10th, 1940, in Poteet, Texas. Raised by her mom, Julia Quintanilla Rocha, and stepfather, Santos Rocha, the older children looked helped out, watching over the younger ones. Celia was the third born, and after Celia's older brother and sister passed away, she became a mother figure to her siblings. Celia and her family, including aunts, uncles, and cousins, like many families back then, were migrant workers. They spent half of the year working as a family all over the country. When Celia was only fifteen years old, she and her family were working in a small town called Petersburg, Texas, where she met her soulmate, Santiago Rivas. The couple had an instant connection and a shared love for family. Celia and Santiago were married soon after meeting on November 30th, 1955. Celia and Santiago still worked as migrant workers and spent several years in California, starting a family. They eventually made it back to Weslaco, Texas, where they spent the rest of their lives together, raising eight children. Santiago worked as a machinist, and Celia worked as a custodian for the Weslaco School District and Hidalgo County. Celia was never afraid of work, having learned the value of laboring as a child. When she was in between jobs, raising her children, Celia sold Tupperware and was one of the top salespeople. Although Celia never had a formal education, she was driven, determined, and understood from a young age that hard work pays off and afforded her children a respectable upbringing. Celia was very family-oriented. She loved her siblings and treated them with the same care as her own children, and visited with them often. So when God blessed Celia and Santiago with grandchildren, then great-grandchildren, they were over the moon, spoiling the grandkids at every opportunity. Celia and Santiago also had a lot of friends. Every Sunday, Santiago would barbecue, and Celia would make the sides so the entire family and all of their friends, along with any other passers-by, could join in the fun. After years of the Sunday traditional barbecue, Celia became known as "grandma" to neighbors, friends, and children's friends. When Celia wasn't working or entertaining the family, she loved to cook, go out to dinner, and watch novelas. Celia also enjoyed shopping and spending some of her hard-earned money. Celia was loving, caring, and had a heart of gold. After retirement, she became a provider for many family members, friends, and even strangers in need. She did this out of the kindness of her heart and never accepted payment for her services. Celia was also a devout Catholic, raising all of her children in the faith. Celia is preceded in death by her mom, Julia Quintanilla, her daughter, Christina Rivas, her sons, Ruben Rivas, and Santiago Rivas Jr., brother, Teofelo Alcoser, and sister, Leonor Tijerina (Jesse). Celia is survived by her loving husband of sixty-six years, Santiago Rivas Sr., children, Nelly Garcia (Charlie) of Weslaco, Evangelina DeLeon (Mario) of Weslaco, Irene Sanchez (Omar) of Weslaco, Rachel Guajardo (Sonny) of West Columbia, Texas, and Noe Rivas of Weslaco, siblings, Santos Rocha, Ricardo Rocha, Armando Rocha (Martha+), Rogelio Rocha (Rosa), Estevan Rocha, and Jose Luis Rocha (Tell+), daughter-in-law, Carmen Rivas, sister-in-law, Celia Alcoser, grandchildren, Santiago Rivas III "Chuck" (Manuela), Elida Ramirez (Cesar), Celina Rivas (David), Clarissa Nobels (Matt), Lorena Garcia, Alexis Garcia (Cathy), Claudia Garcia, Alyssa Guajardo, Lindsey Guajardo, and Naftali Guajardo III, Christina Sanchez, Cynthia Garcia (Nestor), Catherine Staha (Jared), Leslie Garza (Thomas), Marco Rivas, Enrico Rivas, and Andrea Rivas, nineteen great-grandchildren, and one great-great-grandchild. Visitation will be Sunday, 4-9 pm, with a rosary at 7 pm, at McCaleb Funeral Home in Weslaco. Mass will be celebrated Monday, December 13th, 2021, at 10 am, at St. Pius X Catholic Church in Weslaco, followed by burial at Val Verde Memorial Park in Donna.

Weslaco: Celia Rivas, 81, passed away on Wednesday, December 9th, 2021, at Valley Baptist Medical Center in Harlingen, after a courageous battle with pulmonary fibrosis. Celia was born on August 10th, 1940, in Poteet, Texas. Raised by her mom,... View Obituary & Service Information

The family of Celia Rivas created this Life Tributes page to make it easy to share your memories.

Send flowers to the Rivas family.