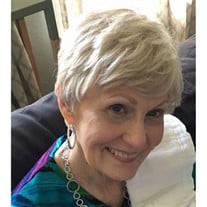 WESLACO - Connie Dargel (Carouthers), age 70, passed away on November 7, 2017, after living with cancer for several years. She died at John Knox Village, near her home in Weslaco, TX. Connie was born in Dayton, TX, on August 19, 1947. She spent much of her youth living in Anaco, Venezuela where her father worked in the oil industry. Connie attended high school at San Marcos Baptist Academy in Texas. She went to Baylor University where she earned a BA in Education. While there, she met and married Russell Dargel, Jr. After graduating from Baylor, Connie spent several years teaching in Missouri and Mississippi, then moved to Donna, TX, where her husband joined his father managing Dargel Boat Works. Connie continued to teach in Donna and then in Weslaco. She taught everything from high-school Spanish to elementary and finally kindergarten, where she was as successful as she was loved. As an educator, Connie was creative, empathetic, and deeply devoted to her students. She received several awards in education, including Teacher of the Year at Airport Elementary in Weslaco. She retired from public school teaching in 2005. Not only did Connie write songs to use in her kindergarten classes, but she also played the piano, sang, and directed the children's choir at First Baptist Church of Weslaco, where she had been a member for many years. She was a loving wife and a devoted mother to her two sons, who inherited her passion for music and her commitment to education. Connie Dargel is survived by her husband of 50 years, Russell Dargel, Jr., her sons, Corey, Aaron, his wife Lisa, and granddaughter Lilian Ellis. She is also survived by her sister, Mary Bray, and her brother, Chris Carouthers. She was preceded in death by her parents, John and Gladys Carouthers, and her brothers, Larry and Leslie Carouthers. In lieu of flowers or gifts, the family asks that you make a contribution to MD Anderson Cancer Center or the cancer-related charity of your choice. Funeral arrangements are under the care of McCaleb Funeral Home of Weslaco.

WESLACO - Connie Dargel (Carouthers), age 70, passed away on November 7, 2017, after living with cancer for several years. She died at John Knox Village, near her home in Weslaco, TX. Connie was born in Dayton, TX, on August 19, 1947. She spent... View Obituary & Service Information

The family of Connie Dargel (Carouthers) created this Life Tributes page to make it easy to share your memories.