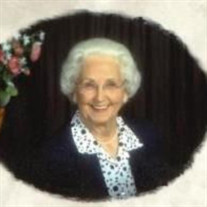 Danetta Aline Atteberry Powell passed peacefully into heaven on September 23, 2020 in San Antonio, Texas at the age of 96. She was preceded in death by her husband, William F. Powell Jr, her parents, Clark and Aline Atteberry, her brothers, Phillip, Eugene, and James Atteberry, and her granddaughter, Laura Francis Peyton. Danetta was born on October 29, 1923 in Beeville, Texas, moved to Mercedes, Texas with her family at the age of 9 months, and graduated from Mercedes High School in 1941. She attended Edinburg Junior College, graduating in 1943. On January 29, 1944 she married her high school sweetheart, William F. (Bill) Powell, in College Station, Texas. After Bill's military service during WWII they settled in Weslaco, Texas where they raised their 4 children. She and Bill were strong Christians and were both involved in their church, 1st Presbyterian, their community, and many activities with their children. Danetta served as a church elder, a church youth leader with Bill at both the local and Presbytery level, and she was active in the women's work of the church. She loved to play bridge, was an active member of Chapter BW of the PEO Sisterhood, and was a wonderful hostess and friend to many in Weslaco. She dearly loved her family and she and Bill hosted many wonderful family reunions over the years. She was an active part of her grandchildren and great-grandchildren's lives and was beloved by all of them. After Bill's death Danetta moved to San Antonio, Texas to be close to family. While living there she was a member of San Pedro Presbyterian Church and also a member of Chapter X of PEO Sisterhood. Danetta is survived by her 4 children, William Eugene Powell (Dana) of San Antonio, Laura Kathleen Peyton (Fred) of Vicksburg, MS, Susan Cordelia Hirtzel (Bob) of Vancouver, WA, Mary Melissa Casey (Bert) of Ingram, TX., her sister, Nancy Pierce of Weslaco, TX, her sister in law, Francis Karasek of Pearsall, TX, 10 grandchildren, 15 great grandchildren and numerous nieces and nephews.

Danetta Aline Atteberry Powell passed peacefully into heaven on September 23, 2020 in San Antonio, Texas at the age of 96. She was preceded in death by her husband, William F. Powell Jr, her parents, Clark and Aline Atteberry, her brothers,... View Obituary & Service Information

The family of Danetta Powell created this Life Tributes page to make it easy to share your memories.

Send flowers to the Powell family.