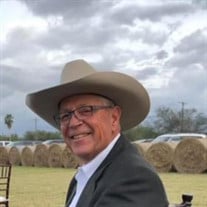 Daniel Edwin Arnold, age 72, loving husband, father, grandfather, brother, and uncle, passed away on January 7th, 2022. Danny was born on January 8th, 1949, in Harlingen, Texas, the son of John and Hazel Guin. Danny was one of four children. Danny’s passion for farming began at a very early age. Growing up, he would work alongside his father and brother, Johnny, doing custom harvesting. Danny used his wages to put himself through college at Southwest Texas State University, where he graduated with a Bachelor of Science Degree in Agronomy. After graduating, he returned to the Rio Grande Valley and started his first farm. Throughout the 70’s he was an outside grower for multiple local produce companies. In 1982, he founded A-W Produce in Mercedes, Texas. In the fall of 1999, the need for a larger facility led Danny to purchase a 6-acre property north of Weslaco. He continued to pack and ship multiple other crops, including cotton, grain, soybeans, and sugar cane. His most recent passion was raising Registered Beef Master Cattle. With the help of many hard-working and loyal employees who stood by his side for over 30 years, A-W Produce was able to flourish and continues to this day. Danny always found time to serve on several committees, including being Chairman of the Texas Produce Association and serving on the USDA Fruit and Vegetable Industry Advisory Committee in Washington D.C. He was also a member of Grace Episcopal Church in Weslaco, Texas, where he served on the Vestry and served as Senior Warden. As passionate about farming as Danny was, he was even more passionate about his family. They came first, no matter what. In 1980, Danny and Karen, the love of his life, were married at her parent’s house in Alamogordo, New Mexico. Danny was a caring, compassionate, sensitive, and giving man who left an impression on all who had the pleasure to know and work for him. Danny’s memory will be cherished and kept alive by his loving wife, Karen Arnold; son Chad Szutz (Jennifer); granddaughter Karsen Arnold Szutz; brother Johnny Guin (Linda); sisters Virginia Davis (Allen) and Jane Bailey; brother-in-law Tom Sutton (Janice); grandchildren Jordan Justia (Micaelle), Reagan Bell, Cole Yarto, Stefan Yarto, Sandon Yarto, Mia Yarto, and Peyton Yarto; along with nieces and nephew, Karlee Loch (Josh), Cameron Guin (Tiffany), Paige Lopez (J.T.), Kayla Guin, and Shannon Gill-Jones. Danny is preceded in death by his mother, Hazel Guin; Father John Guin; Father-in-law Charles Sutton, mother-in-law Nan Sutton, and nephew John Sutton. Visitation will be on Thursday, January 13th, 2022, from 4:00-7:00 pm at McCaleb Funeral home. A graveside service will be held at Highland Memorial Park Cemetery in Weslaco on Friday, January 14th, 2022, at 3:00 pm. In lieu of flowers, the family wishes memorial contributions be made to: Grace Episcopal Church 701 S Missouri Ave. Weslaco, TX 78596 www.graceepiscopalchurchweslaco.com OR Aurora House Foundation P.O. Box 976 Weslaco, TX 78596 https://aurorahouse.org/

The family of Daniel "Danny" E. Arnold created this Life Tributes page to make it easy to share your memories.

Send flowers to the Arnold family.