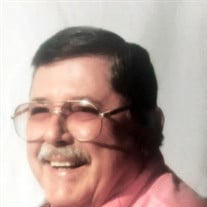 Donna- Dennis Merle Goldsberry, 83, passed away at Rio Grande Regional Hospital in McAllen on Wednesday, May 5th, 2021. Dennis was born on July 8, 1937 to Virgil Merle Goldsberry and Dorothy Willeford Goldsberry in Turlock, California. After graduating from high school, Dennis joined the US Navy and served four years aboard the USS Midway as a Parachute Rigger. After being honorably discharged, Dennis met Lorna Medearis on a lunch date, and it was love at first sight. They were married on May 26th, 1962, and their relationship flourished for the rest of their lives. Dennis and Lorna were a great team and were inseparable. They soon began their family and had three children. While living in Modesto, Lorna and Dennis started a hobby vineyard, and they made their own wine. They even built their own wine cellar. They traveled all over California, visiting other vineyards. When the children were young, the family spent a lot of time fishing, hunting, and camping. Some camping trips were 50-mile backpack expeditions. One of their favorite campsites was Yosemite in the Sierras, which they would visit many times. Dennis served as a Scout Troop Master and baseball coach. Dennis always dreamt of farming on a larger scale. While working for Shell Development as an entomologist, his job often sent him to the Rio Grande Valley. He saw an opportunity here to fulfill this lifelong dream. Dennis and Lorna moved to the valley in 1981 and settled in Donna, Texas. Dennis worked from sun up to sun down to ensure the farm's success. Their crop of choice was citrus. Dennis also became very involved in the citrus industry and shared his knowledge with others to contribute to the growth in the Rio Grande Valley. Dennis sat on or served on the boards of several of the water agencies: the Region M Board, a Texas Water Development Board subsidiary; the North Alamo Water District; and the Donna Irrigation District. He was a lifelong member of the Texas Farm Bureau. Dennis and Lorna loved to explore this beautiful world, enjoying nature, visiting many parts of the United States and Mexico. They would travel to Alaska three times, twice on a cruise and once on a two-week-long motorhome tour. After Lorna's passing, when Dennis wasn't working on the farm, he enjoyed gardening. He had a great love for dogs, birds, and all nature. Dennis was also a great cook. His barbecue ribs were infamous, and he had been a member of a competitive BBQ team. Dennis will be remembered as a true Renaissance man. He took classes in things that interested him, practical subjects like welding, electrical work as well as lighter subjects like history and a film appreciation course that lead him to be a self-styled film critic. He was working on the farm until his death. He was a man of few words but would move mountains for friends or family. Dennis is survived by three children, Kevin Goldsberry (Kat) of Vallejo, California, Kelly Goldsberry of Longview, and Korie Goldsberry Brunes of Donna. There are three granddaughters: Megan, Ashley, and Jordan; and three great-granddaughters: Liz, Luna, and Matilda June. He is also survived by his brother Donald Goldsberry of Riverbank, California. Visitation will be Saturday, May 15th, 10 am-12 pm at McCaleb Funeral Home. A celebration of life will begin at 12 noon followed by a reception. In lieu of flowers, the family requests you plant something, touch the soil, or just enjoy nature. A life celebration will be livestreamed via youtube/mccalebfuneralhome at 12noon.

The family of Dennis Goldsberry created this Life Tributes page to make it easy to share your memories.

Send flowers to the Goldsberry family.