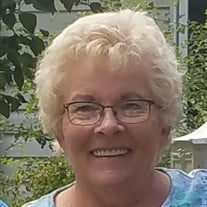 Weslaco-Diane Marie Holmes Zeller, 76, passed away on March 28, 2021, at Sun Valley Rehabilitation and Healthcare Center in Harlingen, Texas. Diane was born on October 20, 1944, to Roland Anton and Jeanette Weber Holmes in Red Wing, Minnesota. Diane grew up on a farm in Welch Village, Minnesota, with two older brothers, James (Jim) and Kenneth (Pete), and three older sisters, Arlene, and twins Bonnie and Betty. She attended country grade school in Vasa, Minnesota, and high school in Cannon Falls, Minnesota. After graduating from high school, Diane moved to St. Paul and attended Rasmussen Business College, earning her bachelor’s degree. She married Michael Zeller on September 25, 1965. The couple lived in Rosemount, Minnesota, from 1965 to 1982, and Diane worked for Gould National Batteries in Mendota Heights in the human resources department. Diane and Mike were a great team, so they decided to become entrepreneurs and invest in some motels. They purchased the Caravan Motel in Harrisonville, Missouri, in 1983, which they managed until 1986, when they bought the Best Western Camelot Inn in Higginsville, Missouri. They sold the Best Western in 1989 and moved to Coon Rapids, Minnesota, where Diane went back to work in human resources. Diane and Mike retired in 2000 and moved down to a warmer climate, Weslaco, Texas. They were both active in the shuffleboard club at their retirement park, Siesta Village. Diane and Mike kept ties to their roots in Minnesota and enjoyed summers at their home on the Mississippi River in Clear Lake. Diane and Mike never had children, so their dogs have always been very special to them. Diane was a strong supporter of animal shelters in Minnesota and Texas and adopted dogs from them. Her last dog, Peaches, had just recently passed. Diane is preceded in death by her husband, Michael, who passed away eleven prior, parents, Roland and Jeanette Holmes, siblings, Arlene (Jim) Wisnicky, James (Sharon) Holmes, and Betty (Daniel) Hoffman. She is survived by brother Kenneth (Jo Anne) Holmes and sister Bonnie (Richard) Tharalson and several nieces and nephews. Diane and Mike will be laid to rest together at the Berne Cemetery in Berne, Minnesota, during a graveside memorial this summer.

The family of Diane Zeller created this Life Tributes page to make it easy to share your memories.

Send flowers to the Zeller family.