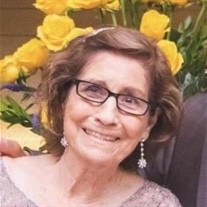 WESLACO - Elida Reyna Sanchez passed away unexpectedly on September 26, 2019. She was born on April 14, 1933 in Weslaco, Texas to Octaviano Reyna, Sr. and Josefa Gonzales Reyna. She was preceded in death by seven siblings, Octaviano Reyna, Jr., Celia Salazar, Macario Reyna, Juanita Reyes, Rodolfo Reyna, Maria Arredondo, and Guadalupe Garza, and her beloved daughter, Ana Maria Sanchez Gandara. She is survived by the love of her life, her husband of 63 years, former Mayor of Weslaco, Joe V. Sanchez, and sons, Jose Sanchez and Obed Sanchez, daughters Sylvia Sanchez (Richard) Garza, and Enedina Sanchez Olivarez, and son-in-law George Gandara. Grandchildren, Alicia and Ezra Sanchez, Adam, Monica Davis, and Rebekah Gandara, Ricky, Joseph, Matthew, and Lucas Garza, Daniel, Angelica, and Marissa Olivarez, Zabrina, Karina and Marina Sanchez, and six great-grandchildren. She is also survived by her siblings Lucinda de los Santos (Miguel) and Robert Reyna. Elida spent many years working as a migrant farmworker, but still managed to graduate from Weslaco High School. She was named Sweetheart of the Catholic Youth Organization and eventually went on to earn several college hours. She then worked at Edelstein’s Furniture and the offices of Dr. Manning and Dr. Warden as a medical assistant. Later, she went on to manage The Learning Center, the family business. Elida worked for Weslaco ISD for many years, where she was the parental involvement liaison for Weslaco High School, a job that took her into the homes of many families in Weslaco, a job she loved dearly. Later in life she became an independent beauty consultant with Mary Kay Cosmetics, working her way up to become a Unit Director. She also worked as a community activist, organizing and singing at prayer meetings at local colonias. In her 60’s she fulfilled a lifelong dream of taking piano lessons. Elida loved music and had a beautiful voice, recording songs with her siblings and cousins. Together with her husband, she produced a video Recuerdos Inovidables, about the migrant experience. Elida was the first lady of Weslaco for twelve years, continuously supporting her husband and the City of Weslaco. She also managed her husband’s career as an author, helping him schedule book signings and speaking events. She devoted her whole life to her husband and her family. Her most important role was raising her family where she spent many years supporting her children and grandchildren in all of their activities. She was a woman of great faith, always telling us to put God first, family second, and job third. Her calling in life was spreading love to everyone she met and sharing the Word of God. Elida created care packages for homeless shelters, individuals in need, and Mujeres Unidas, as well as supporting The American Cancer Society and many other causes close to her heart. Visitation will be held on Sunday, September 29, 2019 from 1:00 pm to 9:00 pm with a 7:00 pm Rosary at McCaleb Funeral Home in Weslaco, Texas. Funeral services will be Monday, September 30, 2019, 10:00 am at San Martin de Porres Catholic Church in Weslaco, Texas with burial to follow at City of Weslaco Cemetery.

WESLACO - Elida Reyna Sanchez passed away unexpectedly on September 26, 2019. She was born on April 14, 1933 in Weslaco, Texas to Octaviano Reyna, Sr. and Josefa Gonzales Reyna. She was preceded in death by seven siblings, Octaviano Reyna, Jr.,... View Obituary & Service Information

The family of Elida Reyna Sanchez created this Life Tributes page to make it easy to share your memories.

Send flowers to the Sanchez family.