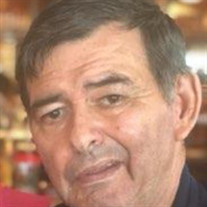 Weslaco: Eloy De la Garza, 71, passed away on Tuesday, August 24, at Knapp Medical Center in Weslaco. Eloy was born on September 23, 1949, to Eugenio De la Garza and Maria Olguin De la Garza in Weslaco, Texas. Eloy grew up in Weslaco and attended Weslaco Highschool, where he was active in football and baseball. When he was a young teenager, he met his soulmate, Norma Escobar. Eloy enlisted in the US Navy as soon as he graduated from high school. He and Norma were married on October 14, 1970, and they spent the rest of their lives together. Eloy went to work for the International Boundary Water Commission as a heavy equipment mechanic for the next thirty years. Eloy and Norma loved to go dancing together. Eloy was a great cook and enjoyed entertaining his friends and family. He loved gambling with friends, and they traveled to Louisiana, Eagle Pass, and Las Vegas. Eloy was a fun-loving guy and got along with everyone. He spent many evenings bowling with a local league. Eloy was also a member of the Knights of Columbus at St. Pius X Catholic Church in Weslaco. Eloy is preceded in death by his parents, Eugenio and Maria De la Garza, brother, Enrique De La Garza, daughter, JoAnn De La Garza, great-nephews, Paul Allen Jr. and Brandon Rodriguez, and brothers, Ernesto and Enrique De la Garza. Eloy is survived by his loving wife and best friend, Norma De la Garza, son, Marcos Eloy De la Garza, grandchildren, Robert Christopher Campos, Nicole JoAnn De la Garza, Joseph De la Garza, siblings, Esmeralda Coronado (Natividad) of Weslaco, Eugenio De La Garza (Melva) of Weslaco, Estella Cantú (Emilio) of Peñitas, Emilia Rios (Ezequiel) of Freeport, Esperanza Cavazos (Juan+) of Raymondville, Elias De La Garza (Letty) of Jones Creek, sister in law, Adela De la Garza of Edcouch, numerous nieces and nephews. Visitation will be Sunday, August 29th, 1-9 pm, with a rosary at 6 pm followed by a time of sharing at McCaleb Funeral Home. Streaming will be available at https://youtu.be/8IKGbb3vj50. Mass will be celebrated on Monday, August 30, at 2 pm, at St. Pius X Catholic Church in Weslaco. Serving as pallbearers will be Mark De la Garza, Eugenio De la Garza, Elias De la Garza, Eric De la Garza, Christopher Campos, and Johnny Cavazos. Friends and Family, The De La Garza Family respectfully requests, in light of the worrisome surge in the cases of COVID-19 currently affecting the State of Texas of late and the delicate health of some of our loved ones, that mourners please observe appropriate social distancing recommendations, to include refraining from embraces, handshakes, or kisses from those not sharing a household. They also respectfully ask that unvaccinated individuals maintain their masks at all times. Please know that your heartfelt condolences and love are keenly felt, even from afar. Thank you for coming to honor and bid farewell to Eloy. With gratitude and warmth, The De La Garza Family

The family of Eloy De La Garza created this Life Tributes page to make it easy to share your memories.