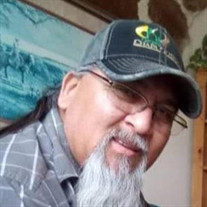 Weslaco: Elpidio “Pio” Alejandro III lost his battle with Non-Hodgkins Lymphoma on Friday, April 15, 2022. On April 10, 1968, Pio was born to Elpidio Jr. and Dora (Garcia) Alejandro in Weslaco, Texas. Pio grew up in Weslaco and spent summers helping his parents in the harvesting business. Pio’s parents worked with several local packing sheds and would harvest and haul seasonal vegetables. Pio was driving a truck at the age of nine and learned the value of hard work. Pio met his soulmate, Irma Serrano, at the Weslaco Highschool Cafeteria when he was fifteen years old. Pio and Irma have been inseparable ever since. They got married in 1989 and had two boys, Omar and Gabriel. Pio naturally followed his father’s footsteps and opened Pio’s Trucking Company. He and Irma were a great team, building their business together. They had a crew of fifty laborers and harvested citrus nine months out of the year. Pio’s Trucking Company operated three trucks and would send Rio Grande Valley citrus all over the country. Then, after the citrus season, Pio would go up north and harvest grain, with Irma often by his side. Pio was well known for his mouth-watering barbecue. Pio entered BBQ cook-offs and loved trying new recipes. Eventually, Pio and Irma, now well-versed in being entrepreneurs, opened Pio’s Tacos and More. Once again, Pio and Irma proved to be an extraordinary team. Pio’s Tacos and More set up for events like Al Fresco and catered for special occasions. Besides being a great cook, Pio was the “life of the party” and had countless friends. Pio made friends everywhere he went and could carry on a conversation with anyone. His outgoing and upbeat personality was magnetic, and it was a rare occasion for Pio to go out in public and not find at least a friend or two. Pio was a great provider, loving husband, and father. He loved spending time with family and friends, but his time with his grandsons was most precious to Pio in the last few years. Pio fought a good fight and demonstrated true character and humility during his illness. Pio is preceded in death by his mom Dora Alejandro and mother-in-law, Martha Serrano. He is survived by his loving wife and business partner, Irma Alejandro, sons, Omar Adrian Alejandro Sr. and Gabriel Aaron Alejandro, his father, Elpidio Alejandro Jr., grandchildren, Omar Adrian Jr., Eleazar Jesus, and Moises Joel Alejandro, siblings, Melissa Alejandro of North Carolina, Melinda Alejandro of Brownsville, Michelle Snead of North Carolina, Amanda Alejandro, Stephen Alejandro, Kimberly Alejandro, all of Alamo, loving father in law, Moises Serrano, sisters in law, Martha Matamoros (Pete), Linda Martinez (Amador), brother in law, Joe Serrano (Ofelia), all of Weslaco, and numerous nieces and nephews. Visitation will be Wednesday, April 20th, 10 am-2:45 pm, at McCaleb Funeral Home, followed by a Memorial Mass at St. Joan of Arc Catholic Church in Weslaco at 3 pm.

The family of Elpidio "Pio" Alejandro III created this Life Tributes page to make it easy to share your memories.

Send flowers to the Alejandro family.