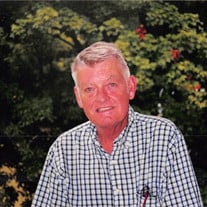 Donna- Errol Jay Lewis, 73, passed away on Wednesday, July 10th, 2019 at Solara Hospital in Harlingen. He was born on January 3rd, 1946 to Clark Lewis and Lorena Mullens Lewis in Weslaco, Texas. Errol grew up in Edcouch with two brothers, Arland and Larry, and two sisters, Lorna and Edna. After graduating, he joined the U.S. Airforce where he met his future bride, Barbara Windom, who was also serving U.S. Airforce. They were married in February 1970. They lived in Edcouch, Weslaco, and California before settling in Donna, where they raised their sons, Lance and Scott, and spent the rest of their lives together. Errol continued his education after he was honorably discharged and earned a Bachelor's Degree in Graphic Design from Pan American University. He spent his career working in graphic design and was naturally very artistic. He enjoyed drawing and painting. Shortly after graduating from college, Errol took a job at Texas Plastics where he spent a few years. Most people will remember Errol from his many years at Veco Printing in Weslaco, where he spent most of his career. He then worked at Fast Signs in McAllen for about ten years until his retirement. Errol spent a lot of his free time working in the yard and gardening and could always found on Saturday morning with a garden hose. Errol had a natural green thumb and enjoyed growing fruits and vegetables. He had a thriving grapevine and it was famous throughout the neighborhood. Errol was a craftsman and enjoyed woodworking. He also loved to go fishing and spent many afternoons on the water. Errol was an animal lover and always had a couple of cats and his Datsuns around the house. Many will remember Errol from his decades of service and volunteer work for Knapp Medical Center and Harvest Night. Naturally, he was always in charge of decorating, and he always outdid himself, working countless hours to make sure the set up was perfect. Errol is preceded in death by his parents, Clark and Lorena Lewis. He is survived by his loving wife of nearly fifty years, Barbara, sons, Lance Lewis of Donna, Scott Lewis of Michigan, granddaughters, Devann Lewis and Julie Lewis, grandsons, Jacob and Jonathon Lewis, brothers, Arland Lewis (Grace), Larry Lewis (Ruby), sisters, Lorna Bray (Hubert), and Edna Yarbrough. A memorial service will be held on Friday, July 19th, 11 am, at McCaleb Funeral Home in Weslaco. Interment will follow at the Rio Grande Valley State Veteran's Cemetery in Mission, Texas.

The family of Errol Jay Lewis created this Life Tributes page to make it easy to share your memories.

Send flowers to the Lewis family.