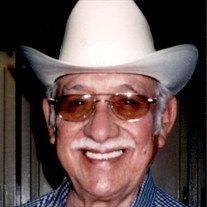 Eusebio "Chevo" Cadena Sr., 95, passed away on Monday, January 17th, 2022, at Valley Baptist Medical Center in Harlingen. On August 14th, 1926, Eusebio was born to Roman Cadena and Librada Benitez in Santa Maria, Texas. Chevo was the only boy and had four older sisters. They grew up in Weslaco, where Chevo met his soulmate, Domitila Reyes. Chevo and Domitila were married on July 4th, 1950, and they made a perfect team. Together, they raised ten children. Chevo was a self-employed truck driver and traveled all over the country, while Domitila cared for the children and worked as a seamstress. Chevo, Domitila, and the children would migrate up north every summer to work in the fields. Even though these trips kept the family clothed and fed, the Cadena family made a vacation out of every season. Chevo was very strict and felt it essential to teach the children the value of hard work, but he rewarded them with something fun. Chevo and Domitila's hard work paid off, and they were able to afford some nice upgrades. Chevo built an outdoor shed that the family used for large gatherings. Chevo encouraged the kids to have their parties at their childhood home and was the happiest when the family was together. Chevo loved a good party and could always lighten the mood with a good joke or prank. The children, grandchildren, great-grandchildren, and friends made priceless memories playing chalupa, cheering on the Dallas Cowboys, or watching a boxing match. Chevo always remained humble and appreciative of his opportunities to provide for the family. Chevo was a loving father with a keen sense of intuition. He could always sense when one of his children was hurting or in trouble and would try to help, whether it was good advice, a hug, a shoulder to cry on, or a non-judgmental listening ear. Chevo's love was unconditional, and the children could always count on his support. Chevo was intelligent and enjoyed keeping up with current events. He had a servant's heart and was a World War II Veteran. Most importantly, Chevo was a devout Catholic, and his faith was evident in how he lived. Chevo is preceded in death by his parents, Roman Cadena and Librada Benitez; his loving wife, Domitila Cadena; son, Juan Cadena; granddaughter, Heather Cantú Cisneros; & sisters, Rita Declet, Marcelina Cadena, Teofila Cortez, and Francisca Muniz. He is survived by his children, San Juanita “Janie” Cantú (Rafael), Librada ”Libby” C. Reyna, Roman Cadena, Letisia "Letty" C. Morales (Martin), Eusebio "Joe" Cadena Jr. (Esmeralda), Osmel "Mel" Cadena (Yolanda), Diana C. Peña (Joel), Dalia Cadena Phillips (Gregory K.), and Delma Cadena (Rolando Palacios), all of Weslaco; grandchildren, Catherine Sarah Cantu (Sally), Rafael "T.J." Cantu Jr. (Heidi), Johnny Reyna Jr. (Deanna), Roman Cadena Jr., Charlene Cadena (Juan), Clarissa Cadena (Julio), Leeanna Cadena, Lori Jo Pineda (Jerry), Jobina Lee Saenz (Isaac), Martin Morales III (Laurie), Beatriz Cadena, Melissa Cadena, Osmel "O.J." Cadena Jr., Gabriella Cadena, Joel "J.J." Peña Jr. (Chris), Valerie J. Peña (Heriberto), Gregory K. Phillips Jr., Alexia D. Rodriguez (Aaron), Delma A. Yanez (Jonathan), Alyssa D. Chavez (Jorge), Denise Palacios, and Rolando Palacios Jr.; 34 great grandchildren; two great-great grandchildren; & numerous nieces and nephews. Visitation will be Thursday, January 20th from 1-9 pm and Friday, January 21st, from 10 am-9 pm, with a rosary at 7 pm on both days. Mass will be celebrated on Saturday, January 22nd, 10 am, at St. Pius X Catholic Church, followed by a military burial at Sacred Park Cemetery in Mercedes.

The family of Eusebio "Chevo" Cadena Sr. created this Life Tributes page to make it easy to share your memories.

Send flowers to the Cadena family.