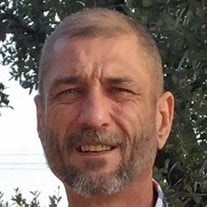 Progreso Lakes/Weslaco- Ferdinand “Ferdie” John Burket V, 58, passed away on Friday, May 14, 2021, after a tragic automobile accident. On March 12, 1963, Ferdie was born to Ferdinand John Burket IV and Glynda Ray Burket in San Antonio, Texas. Ferdie had two younger sisters, LeaAnn and Beth. They grew up in Jourdanton, where Ferdie excelled in sports. He was active in football, basketball, track and field (pole vault), and baseball. Ferdie’s love for sports and competition was a lifelong passion he inherited from his father and passed down to his sons. After graduating high school, Ferdie attended Texas State University in San Marcos. He also started a career in sales with Jupe Brothers followed by A&B Mechanical. He spent a large part of his career with Texas Air Products. Part of his territory was the Rio Grande Valley. When they needed someone to manage a branch in Weslaco, Ferdie seized the opportunity and spent the rest of his life in the Rio Grande Valley. Ferdie also continued working for Texas Air Products for over twenty years. Six years ago, Ferdie went to work for MRI (Mechanical Reps Inc.), where he was currently employed. He was married to Laura Robbins from 1995-2011, and they had twin boys Jake and Josh that were the loves of Ferdie’s life. The boys inherited Ferdie’s love of sports, and Ferdie beamed with joy at the opportunity to attend as many of their events as possible. Ferdie, Jake, and Josh spent countless hours on the road as the boys joined almost every sport they could, many of which Ferdie coached, helped coach, or coached from the stands. Baseball was one of their favorites when the boys were younger, and they even traveled to Arlington a couple of summers for championships. When Jake and Josh signed up for football in high school, Ferdie was overjoyed. He never missed a game. Josh played all four years, and Ferdie encouraged him every step of the way. Ferdie convinced Josh to apply to Texas A&M in Kingsville and was confident that Josh would “walk-on.” No matter the sport, Ferdie was by far Jake and Josh’s biggest fan in the stadium, and everyone knew it. Ferdie was a true outdoor enthusiast. It was so fitting that God would give him twin boys who loved the outdoors almost as much as their dad. The boys spent countless weekends fishing and hunting. Ferdie, Jake, and Josh won the TIFT (Texas International Fishing Tournament) one year, earning the coveted “Grand Bay Champion” Award. They also loved to spend time at the ranch in south Texas. Ferdie was very competitive. He and his friends spent many late nights playing poker, another of Ferdie’s favorite pastimes. Ferdie had a life-saving liver transplant in 2012. After his transplant, Ferdie was sometimes asked by the Texas Donate Life Org to speak about his experience, encouraging others to consider becoming donors. He found this to be so rewarding to reach out to others about the gift of life. Ferdie is preceded in death by his dad, Ferdinand John Burket IV, and uncles James Burket, Donald Ray, and Ronald Ray. Ferdie is survived by his mom, Glynda Ray Burket, children, Jake and Josh Burket, sisters, LeaAnn Lake (Michael), Beth McIntyre (Spencer), niece, Morgan McIntyre, nephews, Mitchell McIntyre, Landon Lake, and Lucas Lake, aunts, Carol Burket and Mary Ann Ray, numerous cousins, former fiance and longtime companion, Melissa Doss and her daughter, Haley Martin. Visitation will be Friday, May 28th, 1-3 pm at McCaleb Funeral Home, with a life celebration at 3 pm. In lieu of flowers, contributions can be made out to Jake and Josh Burket and mailed to 900 W 4th st. in Weslaco, TX 78596 or https://portal.icheckgateway.com/McCalebFuneralHome/Default.aspx, please note Burket family in the memo. Jake and Josh are both seniors in high school and will be needing financial assistance for college and living expenses. Any consideration would be greatly appreciated.

The family of Ferdinand John Burket V created this Life Tributes page to make it easy to share your memories.

Send flowers to the Burket family.