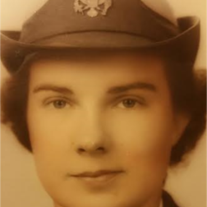 Frances Wyatt Isbell, 92, of Weslaco, Texas, passed away peacefully on May 5, 2016, at John Knox Village. A memorial service will be held for her at 10:00 am Saturday, May 14, 2016 at McCaleb Funeral Home in Weslaco. Frances was born at Schofield Military Barracks in Hawaii to Col. Henry Wyatt Isbell and his wife Dana Cornwell Martin Isbell. As the daughter of a U.S. Army Officer, Frances and her younger brothers Bob (Robert Overton Isbell) and Jack (John Rolfe Isbell) moved often throughout their childhoods, as the family relocated to different military bases around the United States.
After graduating from William & Mary College with a B.A. in History. Frances joined the U.S. Air Force in 1949. She served in Germany, Japan, and the Philippines. She remained in the Air Force for 20 years and retired as a Major. In 1971, she received a Master’s Degree in Library Science from the University of Texas at Austin, and shortly afterward, she came to the Rio Grande Valley to put down roots and to be near her parents, Henry and Dana, who were then living at the family home at Mile 2 West in Mercedes. Upon her arrival in the Valley, Frances put her degree to work for the City of Weslaco in 1971 as Head Librarian of the Weslaco Public Library, lending her energy and expertise to the building of what is now the Weslaco Public Library on Kansas Avenue. During her more than two decades as Head Librarian, Frances also was much involved in the Hidalgo County Historical Commission, the Weslaco Museum Guild, and a number of other philanthropic organizations. Near and dear to her heart were animal welfare and the documentation of the historical record of the Rio Grande Valley, including the placement of historical markers throughout the county. Her efforts are particularly noteworthy for allowing many families in the Valley to discover the resting places of their ancestors. Several military and civic awards were accorded to Frances over her lifetime, including a military Merit Award, Weslaco Citizen of the Year in 2008, the Weslaco Museum Guild Lifetime Achievement Award, and Chair of the Hidalgo County Historical Commission (1983 – 1987).
Frances is survived by her sister-in-law Leura Dority Isbell and the children and grandchildren of her brothers Bob and Jack: Carolyn Isbell Magráns (Ramón) and her two daughters, Christina Frances Magráns (Matt) and Elena Lucy Magráns (Corey); Susan Isbell Davis and her son Hunter G. Davis; Margaret McCulloch Thornborough and her children Zélie Catherine Rebecca Thornborough and Alexander Lucas Lazar Thornborough; John Claiborne Isbell (Margarita Moldonova); and Brecht Wyatt Isbell. Frances is also survived by her four beloved canine companions Xena, Schatze, Trey, and Zuki, who will have a new home and loving family in Arkansas.

"My Aunt Frances"
Frances lived here for forty years, and was a pillar of the community as Weslaco grew up. You all know her, and how much good work she did. Here is Frances as she lives on, in my heart.

Frances had dozens of dogs in her life. If she saw a stray puppy, and saw it again the next day, looking a little sadder, then she knew that it lacked a mother. If nobody else was going to look after the orphan, she just figured it was her job. Every dog she rescued adored her. She raised the finest dogs you can get, with enormous love and zero discipline.

Frances shared that love in all directions, with everyone she met. Two decades ago I visited, and found her raising an impossible baby bird. The mother bird had given up on it, and Frontera Audubon staff didn't have enough time and patience to devote to the poor thing. It's jaw had been broken, on both sides. Just opening its mouth was excruciating for it. To feed the baby, you had to hold a tiny worm directly above its maw, then lower it perfectly in. If you touched the jaw with the worm, the baby would close its mouth in pain. If you wanted a second chance, you had to come back an hour later, when the starving baby was even more desperate. It was hard just watching the bird, and seeing its distress. As I said, an impossible job. Frances, with infinite patience and devotion, nursed that baby to health until it could fly away. She was my Aunt Frances of Assisi.

She truly made me a better person, through her example, and all the understanding and care she gave me. A few years after her baby bird rescue, Frances had an aneurysm on her heart, and almost died. They flew her up to Houston in a helicopter, and she turned out okay in the end. But she was weak and recovering, so I came down to the Valley and spent a couple months looking after her. I got to know her better than I had before. I'd always had a stormy relationship with Papa - he loved me, he just wasn't very good at it. He was caught up in being an alpha male, and making everyone else get with his program. As I got closer to Frances, I found she had every gift and tool that Papa had: brilliant, strong-willed, passionate, a hard and successful worker. But Papa used all those powers mostly to get his way. Frances had all the same powers, but chose a better goal. She looked around her to see who needed help, ann what jobs most needed doing, then she rolled up her sleeves and made everything a little better, every single day of her life.

For thirty years I'd been trying to decipher Papa, and find my place in relation to this overpowering character. As I grew closer to Frances I suddenly realized I'd been looking at a negative all along, and Frances was the same picture set right. She was a vision of color and light, and she still is, she lives on in all of our hearts.

Frances also meted out the best putdown I ever got. We were watching the news together. I got worked up about politics and injustice, like I always do. I went off on a tirade for several minutes, until I realized I was raising my voice and droning on. So I said, "I'm sorry, I'm ranting on again."

I feel a bit smaller now, missing Frances. But I'm still taller than I'd be if she hadn't loved me so well.

Frances and the Dogs
The Valley Catholic says families are never perfect. But we do our best, in one way and another. Yesterday, my aunt stepped lightly from existence, she did not demur or hesitate, she went from day to night asleep in bed. The day before she died, we brought the dogs, and sat in morning unlight. Frances said she was a little cold. We brought a blanket, and some Kleenex if she needed it. At ninety-two, you sit and people fetch things. Xena jumped up to lick her face, and Zuki tried to climb into her lap. If Frances loved one thing, and she loved many, it was allthe dogs she’d nown over the years. A dog does not judge or resent. It will be glad to see you when you make it down. When I remember Frances, she is with her dogs.

To order memorial trees or send flowers to the family in memory of Frances W. Isbell, please visit our flower store.