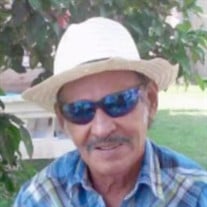 Weslaco-Francisco Valladares, 75, passed away on Wednesday, September 23, 2020, at his home in Weslaco. He was born on December 14, 1945, in El Control, Tamaulipas, Mexico, to Trinidad and Elvia Alvarado Valladares. He migrated to Weslaco in the early eighties. Francisco was a hard worker and was a loyal employee at the Aloe Vera plant in Harlingen for thirty years. After retiring from the Aloe Vera plant, he continued to work in the restaurant industry, working several years at Golden Corral. Francisco was fun to be around. He barbecued almost every weekend, and the gatherings were always full of laughter and smiles. Francisco always had a good joke to tell. He played competitive baseball when he was a child and young adult and continued to enjoy watching baseball for the rest of his life. Francisco is preceded in death by his parents, Trinidad and Virginia Valladares. He is survived by his loving wife of thirty years, Virginia Valladares, children, Ismael Valladares (Melissa) of California, Maritza Valdez of San Antonio, Griselda Contreras (Felipe) of Mercedes, Carmen Valladares, and Francisco “Frank” Valladares (Jennifer), both of Weslaco, grandchildren, Cruz Valladares, Jacqueline and Serena Valdez, Anahy and Esai Contreras, Christian Derrek and Mateo Gael Valladares, sisters, Angelica Valladares, Belia Gonzalez (Alfredo), Josefina Monroy (Antonio), brothers, Jaime Valladares (Isabela), and Ramiro Valladares. Visitation will be Thursday, 1-9 pm, with a rosary at 7 pm, at McCaleb Funeral Home. Funeral service will be Friday, September 25, at 10 am, at McCaleb Funeral Home. Burial will follow at Sacred Park Cemetery in Mercedes, officiated by Father Francisco Solis, St. Joan of Arc Catholic Church in Weslaco.

Weslaco-Francisco Valladares, 75, passed away on Wednesday, September 23, 2020, at his home in Weslaco. He was born on December 14, 1945, in El Control, Tamaulipas, Mexico, to Trinidad and Elvia Alvarado Valladares. He migrated to Weslaco... View Obituary & Service Information

The family of Francisco Valladares created this Life Tributes page to make it easy to share your memories.

Send flowers to the Valladares family.