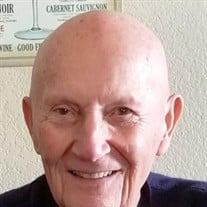 Mercedes: Frederick Lloyd Smith, 83, of Mercedes, Texas, passed away with his loving wife Virginia and his family by his side on January 24, 2022, after bravely enduring a lengthy pulmonary illness. Fred was born on January 1, 1939, in Presque Isle, Maine. He was the second child of Lloyd and Estella Smith. Fred attended Presque Isle High School, Class of 1957. He was an Army Veteran, having served in Korea, Kwajalein, and White Sands, New Mexico. He worked for AT&T as a Microwave Radio Tech in Ashburnham, MA, from 1960 to 1990 before retiring. For many years following his retirement, he worked part-time as an auto transporter for Banks Chevrolet in Concord, NH. Fred was an avid golfer and a lifetime USGA member who played almost every day. He proudly shot his age on numerous occasions. He was always working on improving his game and enjoyed spending time with his golf buddies. Always willing to lend a hand, he made himself available to friends and neighbors in need with home repairs or to assist with anything else he could. Fred attended First Baptist Church in Harlingen, Texas, where he and Virginia were active in the church community. He also enjoyed participating in local events in their home community. Fred is survived by his wife, Virginia J. Smith, of Mercedes, TX, his four children, Robyn Wironen and her husband, Alan, of Topsham, ME, Kimberly Alpaugh and her husband, Gary, of Watertown, MA, Scott Smith and his wife, Alexandra of Wickenburg, AZ, and Eric Smith and his wife, Dana, of Rio Rancho, NM. He is also survived by three stepchildren, Barbie Echols-Gunter of Harlingen, TX, Deborah Parrish and her husband, Bobby, of San Benito, TX, and Tammy Echols of Harlingen, TX. He is further survived by 19 grandchildren, 15 great-grandchildren, and several nieces and nephews. Fred was predeceased by his first wife of 52 years, Sylvia Dawn (Tufts) Smith, his parents Lloyd and Estella Smith, and his sister, Evelyn Rodriguez. His family would like to thank the 5th floor ICU staff at Knapp Medical Center in Weslaco, TX, for their care and consideration in making his final days as comfortable as possible. A memorial service officiated by Pastor Wade Hood will be held February 25, 2022, at 2 pm, at First Baptist Church in Harlingen, TX. In lieu of flowers, the family asks that donations be made in his name to First Baptist Church of Harlingen, TX.

Mercedes: Frederick Lloyd Smith, 83, of Mercedes, Texas, passed away with his loving wife Virginia and his family by his side on January 24, 2022, after bravely enduring a lengthy pulmonary illness. Fred was born on January 1, 1939, in Presque... View Obituary & Service Information

The family of Frederick Lloyd Smith created this Life Tributes page to make it easy to share your memories.

Send flowers to the Smith family.