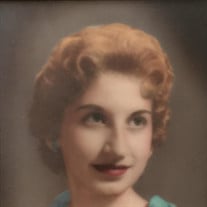 Genoveva (Beva) Graciela Cantu Guerra was born on June 16, 1942 Died: August 26, 2020. Genoveva was born in Raymondville, TX, to Enrique Cantu and Maria Jesusita De La Rosa Cantu. She was raised in Raymondville, TX. Genoveva graduated from Raymondville High School and was crowned Ms. Raymondville in 1959. She married Carlos Guerra of Weslaco on May 27, 1962 and moved to Weslaco, where they would live the rest of her lives and raise their 3 children. She worked alongside her husband at Montalvo and Guerra Insurance Agency, then for the Weslaco ISD Superintendent’s office for many years. In 1987, she began working alongside her husband Carlos Guerra Allstate Insurance until his retirement in 2006. Genoveva was a beautiful woman of grace and strong faith. She worked tirelessly alongside her husband, building very successful businesses. Genoveva and Carlos traveled the world with Allstate and with their friends and family. She loved her grandchildren dearly, often cooking and baking their favorite dishes. Despite her crippling rheumatoid arthritis, she always gave so much to her family and she will be missed immensely. She is preceded in death by her parents Enrique and Maria J. Cantu, and her husband Carlos Guerra. She is survived by her sons Carlos Guerra Jr., Ricardo J. Guerra (Myriam C.), her daughter Ana I. Guerra Arroyo (Victor), her brother, Mario Cantu Jr. (Celia) of Corpus Christi; her grandchildren, Julio C. Marines Jr., Christopher J. Marines, Victoria E. Guerra, Enrique A. Guerra, Tiana K. Guerra and Dominic M. Guerra, and numerous nieces and nephews. The family would like to thank the entire staff at John Knox Village for their compassionate care of Genoveva. And a special thanks to Robert Sepulveda, M.D. for his lifetime of service to Mr. & Mrs. Guerra.

The family of Genoveva Guerra created this Life Tributes page to make it easy to share your memories.

Send flowers to the Guerra family.