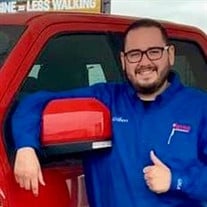 Loving, Giving, Kind, Empathetic, Sarcastic, Humorous, and Loyal, are a few of the words that come to mind when remembering Gibby Avila. At one moment, he could be lending an ear and offering advice, and the very next moment he could be cracking a joke and making an entire room of people fill that room with laughter. Awhile later he could be, celebrating a family event with those he loved most, and later that evening he could be out with his friends making sure everyone around him was having the time of their lives. When he laughed, he laughed with his whole heart, and when he smiled, it was hard not to smile right along with him. No matter who you were, or how long you had known him, Gibby genuinely cared for all and went out of his way to make sure those he cared about, were happy. On Monday, November 23, 2020, Gilberto “Gibby” Horacio Avila, 31, suddenly passed away. Gibby’s life began on a chilly evening on February 7, 1989, at Valley Baptist Medical Center, in Harlingen, TX. The day Gibby was born was so cold, that all the local schools were closed down by 9:30am, that morning. Gibby was raised and lived all his life on Virginia Street in Mercedes, TX, and his birth brought immense joy to the lives of his mother Olga, his father Daniel, his older brother Daniel and all his family. Throughout his life, Gibby was always a helpful, supportive, and loving son, grandson, husband, brother, uncle, nephew, cousin, and friend to all. Gibby attended school in the Mercedes Independent School District, where he was involved in various extracurricular activities including U.I.L., Band, Athletics, Destination Imagination, and Student Government. Outside of school, Gibby played various sports including soccer, baseball, and football. Additionally, he was an Altar Server at Our Lady of Mercy Catholic Church in Mercedes, for nine years. After graduating from Mercedes High School, Gibby attended the University of Texas-Pan American and ultimately decided to go into sales. He worked briefly at Zales Jewelry in Mercedes, then took a job at Academy Sports in Weslaco. Afterward, Gibby worked at Audi, then Payne Weslaco Ford, and Boggus Ford McAllen. During his tenure working at each location, Gibby established many warm friendships and enjoyed his time working alongside the many friends he met along the way. Gibby is predeceased by; his father, Daniel “Pops” Avila Jr.; his grandfather, Daniel “Pops” Avila Sr.; his grandfather, Horacio Pequeno Sr.; his grandmother, San Juanita Pequeno; and his aunt, Maria Elia Pequeno. Left to treasure his memory are; his beloved mother, Olga Avila; his favorite brother, Daniel Eduardo (Maday) Avila; his grandmother, Maria Avila; his aunt, Anita Pequeno; his aunt, Diana (Jose) Gomez; his uncle Horacio (Alma) Pequeno Jr.; his aunt, Janie (Joe) De Los Santos; his uncle, David (Oma) Avila; his great-aunts, Maria Luisa Pequeno and Arcelia Wyatt; his cousins, Joey (Denise) De Los Santos, Joanna De Los Santos, Josiah Gomez, Nicolas Avila, Alyssa Pequeno, Noah Avila, Kaitlyn Avila, Kianna Avila, and Horacio Pequeno III, his nephews and nieces, Nathaniel Elias and Elizabeth Anne Avila, Agustine, Diego, and Kassandra Guzman, Carly Pineyro and Isabelle Villarreal. Visitation will take place on Monday, December 7th from 10:00 am to 9:00 pm, with a Holy Rosary to be prayed at 6:30 pm that evening. We will also have a time of sharing following the rosary at 7:15 pm A Funeral Mass will be celebrated at Sacred Heart Catholic Church in Mercedes, TX on Tuesday, December 8th, at 11:00 am. Interment will immediately follow at Restlawn Memorial Gardens, in La Feria, TX. Please note, while at the funeral home, special accommodations will be made to ensure all CDC, State, and Local social distancing guidelines are observed. Due to the current CDC, State, and Local social distancing guidelines, only fifty family members will be allowed entry into the church. Due to the outdoor nature of the burial, all are invited to join the family for the burial. We kindly ask that you please wear a mask and observe all social distancing requirements. Funeral arrangements have been entrusted to the care of McCaleb Funeral Home, in Weslaco, TX.

Loving, Giving, Kind, Empathetic, Sarcastic, Humorous, and Loyal, are a few of the words that come to mind when remembering Gibby Avila. At one moment, he could be lending an ear and offering advice, and the very next moment he could be cracking... View Obituary & Service Information

The family of Gilberto Horacio Avila created this Life Tributes page to make it easy to share your memories.

Send flowers to the Avila family.