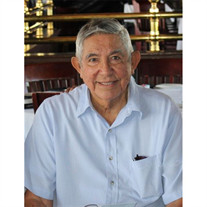 Weslaco - Guadalupe Jesus Camargo (Lupe), 83, passed away peacefully after a brief illness on November 6, 2017. He was born July 20, 1934, to Jesus and Clemencia Villarreal Camargo in Brownsville, where he was raised along with his four siblings, Juanita, Alicia, Emilio, and Blanca. Lupe graduated from Brownsville High School and started college at Texas Southmost, where he met his future bride and soulmate, Graciela Hinojosa (Grace) of Premont. Lupe finished his studies at Texas A&M, earning a degree in Civil Engineering. Shortly after, he and Grace were married on August 2, 1959. They settled in Raymondville, where they had four children, Cynthia, Diana, Norma, and Carlos. Lupe started as a civil engineer with the Texas Highway Department and worked his way up to Head Construction Engineer for the entire department. Lupe and Grace moved their family to Weslaco in 1980, where they would enjoy the rest of their lives together. Lupe retired from the Highway Department in 1992 after 40 years of service, though he remained active in his profession by providing contract engineering services. Lupe also stayed busy with hobbies and volunteering. He was a true "jack of all trades"--he could make and fix just about anything, including refurbishing several old cars in his spare time. Lupe was an active volunteer and community servant by serving in religious, service and professional organizations. He served as President of the Our Lady of Guadalupe Men's Club, Lions Club, RGV Texas Society of Professional Engineers and Sembradores. He most recently enjoyed preparing tax returns for the public through AARP. Lupe was a great cook. He participated in various pan de campo competitions for many years, finally perfecting his recipe. He really loved cooking for family and friends, especially barbecuing and frying fish. By far, his best dish was menudo, which turned many skeptics into fans. In their 58 years of marriage, Lupe and Grace made countless friends and memories--from participating in their social clubs to dance the night away or to travel across the U.S. in a caravan of RVs. Lupe also enjoyed watching football, particularly following his beloved Fighting Texas Aggies (Whoop!). He was the first in his family to graduate from A&M, leading to two more generations of Aggies to following in his footsteps. Lupe was really proud of teaching his family how to hunt and fish and went on to shared these passions with his grandchildren. He loved spending time with his grandchildren and was very proud of their accomplishments. Lupe will be fondly remembered for his great sense of humor. He was a bit of a prankster and loved to tell jokes. His infectious smile, fun personality and ability to create laughter could turn any situation into a joyous one. Lupe is preceded in death by his parents, Jesus and Clemencia Camargo and his sister, Alicia Draker. He is survived by his loving wife of 58 years, Graciela; his children, Cynthia Schreiber (Dan Hoying) of Edmonds, WA, Diana Franz (Chris) of Edinburg, Norma Cabaza (Aaron) of Austin, and Carlos Camargo of Houston; his siblings Juanita Wilson of Katy, Emilio Camargo (Gloria) of Katy, Blanca Gill (John) of Astor, FL, sister in law, Lily Garcia (Luciano ) of Brownsville; and his grandchildren, Monique Schreiber, Ben and Mia Franz, and Amelie and Christian Cabaza. The family would like to thank the outstanding ICU doctors, nurses, and staff at Knapp Medical Center for the care and compassion they showed to us during Lupe's hospitalization. Visitation will be held at McCaleb Funeral Home Chapel on Thursday, November 9 from 1-9 pm, with the family present from 5-9 pm and rosary at 7 pm. Mass will be held on Friday, November 10 at 10 am at St. Pius X Catholic Church in Weslaco with the burial of cremated remains to take place at 4 pm at Highland Memorial Park in Weslaco. Serving as pallbearers will be Dan Hoying, Chris Franz, Aaron Cabaza, Ben Franz, Christian Cabaza, and Juan Trevino. Honorary pallbearers will be Leonel Lopez, Ernesto Rodriguez, Richard Buchen, Beh Badiozzamini, Liborio Hinojosa, and Eloy Vera. In lieu of flowers, the family would request that you make a donation in Lupe's name to St. Pius X Catholic Church in Weslaco or South Texas ISD Foundation Board in Mercedes. Funeral arrangements are under the care of McCaleb Funeral Home of Weslaco.

Weslaco - Guadalupe Jesus Camargo (Lupe), 83, passed away peacefully after a brief illness on November 6, 2017. He was born July 20, 1934, to Jesus and Clemencia Villarreal Camargo in Brownsville, where he was raised along with his four siblings,... View Obituary & Service Information

The family of Guadalupe Camargo created this Life Tributes page to make it easy to share your memories.

Send flowers to the Camargo family.