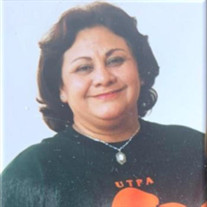 Guadalupe "Lupe" Francese, 70, passed away on March 25, 2020, after a resilient fight with Parkinson's disease. Lupe was the sixth born to Martin and Isabel Rivera Aguirre in Weslaco, Texas, on January 9, 1950. She grew up in Weslaco and graduated in 1969 from Weslaco High School. Lupe thrived in education and was passionate about learning and her chosen field of social work. She continued her education and earned a Bachelor of Arts in Social Work from Pan American University in 1972. Lupe left Weslaco and moved to New York, where she would get married and have her only daughter, Veronica Francese. She also earned a Master's Degree in Social Work from Fordham University in New York City in 1982 and later received a Bachelor's Certificate in Orientation and Mobility in 2007. Lupe wanted to become an expert in her field, and she earned every credential she could fit in her schedule. Lupe worked twenty-five years as a social worker in New York City for Little Sisters of the Assumption, Little Flower Children and Family Services, and New York City Board of Education. The family came back home to Weslaco in 1999. Lupe continued her life's mission of helping others through her career. Many will remember her from Donna ISD, where she worked as a social worker for fifteen years and served as an orientation and mobility specialist. Her pride and joy were her daughter Veronica, who preceded her in death after suffering a severe asthma attack at the beginning of her senior year in high school. Lupe loved living in New York City, where she experienced all she could. She flourished in a fast-paced environment where there was always something new and fun to do. Lupe was known as the private tour guide to her family and friends. She was well versed in all New York had to offer and delighted to show her visitors around the city. She also loved to see the world and traveled extensively to Europe, visiting countries like England, Poland, Italy, France, and Switzerland. Lupe enjoyed playing slot machines at the casinos, and some would say she enjoyed the risk and excitement of the atmosphere it provided. However, her favorite pastime was spending time with her family. Lupe was well known as the "favorite aunt." She doted on her nephews and nieces and was generous with her time and gift-giving. It was more than just time and gifts that made Lupe's unique bond with her nephews and nieces so special. It was a type of understanding, nurturing, and instinct that was only true of Aunt Lupe. That bond grew stronger after the loss of Veronica. The love and devotion Lupe felt for her nephews and nieces was a mutual feeling. They all felt blessed to have each other. Most importantly, Lupe had a strong faith and remained genuinely devoted to God's purpose in her life. She served as a CCD teacher and attended church at St. Pius X Catholic Church of Weslaco. Lupe was a devout Christian and helped many people in need. She was a charter member of Catholic Daughters of the Americas Court Our Lady of Schoestant #2672 in Weslaco. Lupe was jovial, outspoken, and serious when she had to. She was always seen as a leader throughout her career and in her family. She earned the respect of many by her selfless acts of kindness, leadership style, loving spirit. Lupe was easy-going and tough as nails. She was determined to follow her calling and used her natural intelligence to soak in all that she could, and was, therefore, able to give back to her students and community. Lupe was a great listener and always had a funny story or joke to brighten up your day. She touched the lives of so many in such a short time and indeed served God's purpose. Lupe is rejoicing in Heaven with her parents, Martin and Isabel Aguirre, her beloved daughter, Veronica Francese, loving brother, Frank, and others who have gone before her. She is survived by her loving siblings, Nora Cantu (Arturo+) of McAllen, Rosie Cuellar (Alfredo) of Weslaco, Johnny Aguirre (Eva) of Weslaco, Dolores Vega (Rene) of Mercedes, Adela Carrillo (Mario) of Pharr, Anna Villarreal (Izzy) of Weslaco, Martha Cavazos (Juan Jr.) of Weslaco, Josie Ramos (Manuel) of Weslaco, Delia Cardenas (Rudy) of Donna, and Diana Frazier (Jeff) of Olive Branch, MS, and numerous nephews and nieces. Visitation will be Thursday, March 26, from 9 am-6:30 pm. A private family time of remembrance and sharing will held at 6:30 pm, followed by a Rosary at 7 pm. A private family Celebration of Life will be Friday, March 27, at 10 am, at McCaleb Funeral Home Chapel, officiated by Rev., Dr. J. Rene Vega, DR. Min. Burial will follow at Highland Memorial Park in Weslaco, officiated by Rev. Robert De Long, the priest from St. Joseph's Catholic Church in Donna. A special thank you to Weslaco Nursing and Rehab and her loving family, for the kindness and compassionate care provided to Lupe.

Guadalupe "Lupe" Francese, 70, passed away on March 25, 2020, after a resilient fight with Parkinson's disease. Lupe was the sixth born to Martin and Isabel Rivera Aguirre in Weslaco, Texas, on January 9, 1950. She grew up in Weslaco and graduated... View Obituary & Service Information

The family of Guadalupe Francese created this Life Tributes page to make it easy to share your memories.

Send flowers to the Francese family.