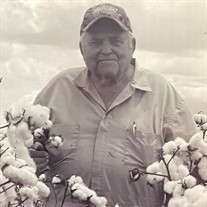 MERCEDES - Hjalmer “Buddy” Oscar Hovda, 95, entered eternal rest on Monday, January 3rd, 2022, at his home in Mercedes, Texas. Born on April 8th 1926 to Thaulow Hovda and Amelia (Bengston) Hovda in Recine Township, Minnesota, Buddy spent his childhood on their family farm alongside seven siblings. He enlisted in the US Navy in January of his senior year in high school and immediately following graduation, Buddy drove to Tennessee to officially serve our country as a gunner on the TBF Avenger. While stationed in Norman, Oklahoma, Buddy went on a blind date with Gretchen Theimer, and the two soon realized that they were a perfect match. The couple married on June 19th, 1948 in Oklahoma City and spent their first few years together in Minnesota. In 1928 Gretchen’s parents purchased San Pedro Ranch and enjoyed visiting their piece of the Rio Grande Valley whenever they got the chance. After some convincing from his father-in-law that the ranch would make an excellent farm, Buddy, his bride and their first son moved to Progreso, and in 1951 began what would become a lifelong career in farming. Buddy and Gretchen worked hard to make Hovda Farms successful. Gretchen worked outside the home and cooked meals for the farmhands after work and on weekends, while Buddy spent many long hours behind the steering wheel of a tractor. They raised 5 children in Progreso and were proud members of that community for many years. On most mornings, you could find Buddy enjoying a cup of coffee at the Progreso Co-op; in later years he was known to have a grandkid or two in tow. Buddy purchased more land south of Mercedes and eventually retired alongside Gretchen on their favorite part of the farm. They spent many evenings and weekends there with family and close friends, hosting the Hovda Family Christmas Eve party, playing pinochle and watching grandkids play outside. Buddy enjoyed hunting, spending time outdoors, watching old westerns and faithfully cheering on the Dallas Cowboys. By far, his favorite hobby was flying, and he was proud to be the 13th Charter Member of the Confederate Airforce. Most importantly of all, Buddy was a man of God, and his faith always took precedence in his life. He was an active member of Immanuel Lutheran Church in Mercedes and later, Shepard of the Valley Lutheran Church in Weslaco. Buddy led by example, living a life of integrity, honor, and diligence. He was a true steward of the land God created and made the most of every drop of daylight. Hjalmer is preceded in death by his parents, Thaulow and Amelia Hovda, son, David Hovda, siblings, Betsy Anderson, Herman Hovda, Margaret Close, Oliver Hovda, Frieda Jensen, and Sky Hovda. He is survived by his loving wife, Gretchen, children, Allen Hovda (Debby) of Corpus Christi, Gretchen Hovda of Weslaco, Hans Hovda (Connie) of Weslaco, and Hannah Cluiss (Craig) of Conroe, daughter in law, Lola Jean of San Antonio, sister, Molly Paschke of Blueearth, Minnesota, grandchildren, Erik Hovda (Robyn), Heidi Yowel (Carl), Micah Hovda (Jennifer), Hans Hovda (Kristy), Kristin Treadway (Randy), Jonathan Hovda, Joshua Hovda (Kelly), Jordan Hovda (Kelly), Matthew Williams (Debra), Gretchen Ramirez (Noe), Signe Cluiss and Lieshen Cluiss, Kaitlin Hovda, Elizabeth Seschelski (Clint), Haedan Hovda, Anika Hovda, great-grandchildren, Kristian, Kolin, Allison, Ryan, Nick, Joel, Elizabeth, Kathryn, Emma, Benjamin, Seth, Shelby, Kameron, Kira, Klarissa, Lilliana, Jonas, Jace, Asher, Corbin, Levi, Tove, Sarita, Sadler, and numerous nieces and nephews. Visitation will be Wednesday, January 5th from 2-7 pm, with family present from 5-7 pm. On Thursday, January 6th, at 3 pm, Graveside service will be held at Highland Memorial Park, officiated by Pastor Roland Gurgel of Shepard of the Valley Lutheran Church in Weslaco. His Grandsons will serve as pallbearers. Honorary pallbearers: Tim Reid, A.C. Fuller, Hector Pinon, Rodney Kaase, Ken Eilers, and Tommy Whitlock.

The family of Hjalmer Oscar Hovda created this Life Tributes page to make it easy to share your memories.

Send flowers to the Hovda family.