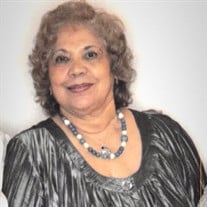 Donna- Hortencia A. Martinez "Tencha," 80, entered into her eternal resting place on Wednesday, February 5, 2020. She was born on April 3, 1939, to Tranquilino Jr. and Rebecca Hinojosa Avila in Comstock, Texas. Tencha grew up in Donna with fourteen siblings. She excelled in school and band and was active in her high school band. Tencha played the clarinet and loved playing at football games and cheering on her beloved Donna Redskins. After graduating from Donna High School, Tencha married Rogelio Martinez. They spent thirty years in Illinois and had three children together. Many will remember Tencha from her many years with Donna ISD, where she eventually retired. She also remained a loyal fan of her high school alma mater. She attended every football game and most Redskin sporting events. Tencha was always the first to volunteer when asked and did so with a servant's attitude. Tencha was a very devout Catholic and was a member of numerous prayer groups, including the Divine Mercy and Catholic Daughters of the Americas. She was a prayer warrior despite having been thru the pain of losing three children. Tencha always kept her faith and was an example to all who knew her. Tencha had a laid back personality and had a lot of friends. She was also devoted to her family, brothers and sisters, and nephews and nieces. Tencha is preceded in death by her parents, sons, Rogelio and Roberto Martinez, daughter, Alida Elena Rios, brothers, Domingo, Celestino, and Carlos Avila, sisters, Lydia Casarez, Becky Solis (Arturo), and Aurora Cerceres. Her siblings survive her, Yolanda Martinez (Hector), Mike Avila (Arcelia) both of Donna, Richard Avila (Anna), Adela Avila, both of Corpus Christi, Alfredo Avila (Becky), Oscar Avila (Janie), Kenny Avila (Emma), all of San Antonio, Glendelia Rosales of Lewisville. Also surviving are, father of her children, Rogelio Martinez, son in law, Michael Rios, sisters in law, Aurora Avila, Anita Gonzalez, brother in law, Ramiro Casarez, and numerous nephews and nieces. Visitation will be Sunday, February 9th, 3-9 pm, with a rosary at 7 pm at McCaleb Funeral Home in Weslaco. Mass will be Monday, February 10th, at 10 am, at St. Joseph Catholic Church in Donna. Interment will follow at Highland Memorial Park. Serving as pallbearers will be Hector Martinez Jr., Rene, Fidel, Mike, Richard, and Kenny Avila.

Donna- Hortencia A. Martinez "Tencha," 80, entered into her eternal resting place on Wednesday, February 5, 2020. She was born on April 3, 1939, to Tranquilino Jr. and Rebecca Hinojosa Avila in Comstock, Texas. Tencha grew up in Donna with... View Obituary & Service Information

The family of Hortencia "Tencha" A. Martinez created this Life Tributes page to make it easy to share your memories.

Donna- Hortencia A. Martinez &quot;Tencha,&quot; 80, entered into her eternal...

Send flowers to the Martinez family.