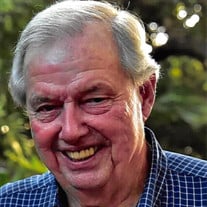 WESLACO - Jackie "Jack" Phillip Dyer, 81, of Weslaco, Texas passed away in his home surrounded by his family on December 1, 2020 after his battle with cancer. Jack was born on September 1, 1939 to James and Jeffie Dyer in Weslaco, Texas. He was the youngest of six children. In 1965, Jack married Thelma Whitaker, also of Weslaco, Texas where they resided and raised their family. He graduated from Weslaco High School in 1957. He then enlisted in the Army where he served most of his time in Alaska. He spent the rest of his years farming in the Weslaco area. His spare time was devoted to his love for tropical plants, including palm trees and bromeliads. Jack was a terrific storyteller with a great sense of humor. He had a way of bringing people together and he enjoyed every minute of it. He also loved to travel with friends and family. He loved a fine dining experience, whether it was at home or at a restaurant. He is survived by his wife of 56 years, Thelma, his daughter Roxie (Bobby) Blood, his sons, Tad Dyer (Heather Womble), and Jonah Dyer, his grandsons, Cody and Wyatt Blood, Ethan, Jack, and Logan Dyer. He is also survived by his sister, Mary (Dale) Jackson of Farmington, New Mexico along with many nieces, nephews, and cousins. He was preceded in death by his parents, James and Jeffie Dyer, his brothers, James Dyer and Ray Dyer, his sisters, Billie Ruth Brandt and Francis Gerard, and his son, Jeffery Ray Dyer. A celebration of life will be announced at a later date. Memorials may be made to M.D. Anderson Cancer Center.

WESLACO - Jackie "Jack" Phillip Dyer, 81, of Weslaco, Texas passed away in his home surrounded by his family on December 1, 2020 after his battle with cancer. Jack was born on September 1, 1939 to James and Jeffie Dyer in Weslaco, Texas. He... View Obituary & Service Information

The family of Jack Dyer created this Life Tributes page to make it easy to share your memories.

Send flowers to the Dyer family.