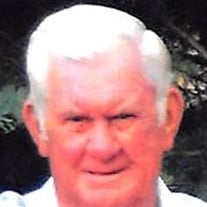 PROGRESO - Jackie Joe “JJ” Gatton,86, passed away on January 17, 2020, at Knapp Medical Center in Weslaco. JJ was born on Christmas Day, 1933, to William Sprague and Lola Estell Gatton. He was the baby of the family and had an older brother, Billy, and sister, Peggy. JJ played football and ran track during high school. After graduating from Weslaco High, he attended Pan American University. JJ joined the US army in 1953 and served in the Korean War from 1953-1957. After being honorably discharged, JJ married Mary Ellen Fuller and began a career in farming. They raised three children, Bobby, Timmy, and Suzy in Progreso. JJ was a true family man, working tirelessly on the farm and volunteering in his spare time. He served on the Progreso School Board for fifteen years and was an active member of the Weslaco Elk’s Lodge for many years. JJ also loved life and enjoyed his free time to the fullest. He had lots of friends and was fun to be around, always cracking a joke and creating laughter. JJ was a sports fanatic and watched all sports, but his favorite pastime was college football, and he was a die-hard UT Longhorn fan. JJ is preceded in death by his parents and siblings. He is survived by his loving wife of sixty-two years, Mary Ellen, sons, Timmy Gatton (Jackie) of Round Mountain, Bobby Gatton (Karen) of Weslaco, Suzy Schwarz of Ennis, grandchildren, Brandon Gatton (Courtney) of Marble Falls, Kyndra Munoz (Alex) of San Antonio, Amanda Gatton of Austin, Miles Schwarz of Houston, and Tanner Schwarz of Colorado, great-grandchildren, Bailey Mendiola, Remi Gatton, and Aleigh Gatton. Visitation will be Monday, January 20, 2020, 10:00 am, with a memorial service at 11 am. Serving as honorary pallbearers will be A.C. Fuller, David King, Roy Moravitz, Bobby Maupin, Neal Machen, Jimmy Green, and Bobby Lackey. In lieu of flowers, contributions can be made to Texas Elk's Children's Services, 1963 FM 1586 Gonzalez, TX 78629-5623.

The family of Jackie Joe Gatton "JJ" created this Life Tributes page to make it easy to share your memories.

Send flowers to the Gatton family.