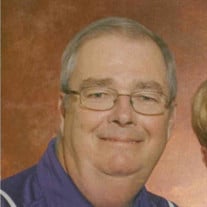 WESLACO - James Dean Nantz was born June 27, 1947 in Davenport, Iowa to Mildred Pennock Nantz and Orville Robert Nantz. Jim was raised in DeWitt, Iowa and attended Central Community Schools. In 1964 he met Karen Schellhase Nantz and they married in 1969. He is survived by his wife, their daughter, Denyse Nantz Schumacher (Perry) and granddaughter, Kelsey Schumacher. For many years they raised foster children in Black Hawk County, Iowa. In 1967 Jim enlisted in the US Navy. He was stationed on the aircraft carriers, USS Bennington and USS Kitty Hawk. He completed several cruises to Japan, Guam, Philippines and Viet Nam. He served 4 years active duty and 6 years in the active reserves in Waterloo, Iowa. Jim attended Morningside College and graduated from the University of Northern Iowa. He spent most of his career as a facilities manager at Sears and Roebuck, the University of Northern Iowa, and Eastern Illinois University. He and Karen were avid UNI Panther fans and regularly contributed to the UNI Foundation. A scholarship fund in their names was established at UNI’s School of Business. Jim retired in 2008. In 2010 he and Karen became Winter Texans, wintering in Mercedes, Texas. In 2014 they made the move to Texas. Jim loved fishing, RVing, traveling, working on cars including his beloved VW Thing, and socializing with friends. He started a retirement career at Llano Grande Resort and Country Club in Mercedes. He was well known for leading activities, administering audio visual equipment throughout the resort, and helping others with computer problems. He embraced new technology with a passion. He and Karen loved to attend dances. Jim was a loyal member and Past Exalted Ruler of the Weslaco Elks Lodge. Most of all Jim loved his family and his Scottish Terriers. Jim died of lung cancer after a brief illness. Memorials may be directed to the Weslaco Elks Lodge, 201 S. Border Ave, Weslaco, TX 78596. A memorial service will be held at a later time at Homer Big Grove Cemetery, Garrison, Iowa.

The family of James Nantz created this Life Tributes page to make it easy to share your memories.

Send flowers to the Nantz family.