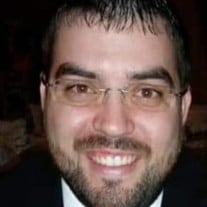 Weslaco-Jason Scott Cavazos, 31, passed away suddenly on Sunday, February 28th, 2021, at his home in Weslaco. On June 24th, 1989, Jason was born to Johnny Ray and Mary Lou Cantu Cavazos in McAllen, Texas. Jason was the younger brother of Johnny Ray. The two were only 15 months apart and were almost inseparable. Jason grew up in Weslaco. He was active in Weslaco Little League throughout his childhood. Jason continued his love of baseball throughout high school. He also played tennis for the Weslaco Panthers, where he graduated in 2007. After high school, Jason earned his Bachelor’s Degree from Texas A&M in Kingsville and his Master’s Degree in Human Resources from the University of Texas Tyler. Jason returned to Weslaco, where he, alongside his big brother Johnny and parents, volunteered at Weslaco Little League. Jason and Johnny coached many teams together, and Jason thrived in an environment of volunteerism. He loved the game of baseball and loved helping kids. Jason also picked up golf, and this hobby became one of his favorite pastimes. Jason went to work at Lonestar National Bank for a few years and then worked for the Texas Comptroller’s office for the past five years. Jason was a great friend and will be remembered for his kindness and loyal personality. He never left anyone behind, a friend who could always be counted on. He was a great father to his only daughter Avery Sky. He was a loving and caring son and brother and will be dearly missed. Jason is preceded in death by his paternal grandmother, Adela Coronado Cavazos, and maternal grandparents, Raul Cantu and Lupita Espino Cantu. Surviving Jason is his parents, Johnny Ray Sr. and Mary Lou Cavazos, brother, Johnny Ray Cavazos Jr., daughter, Avery Sky Cavazos, maternal aunts and uncles, Marisela and (Jose F. Lopez+), Elida & (Servando Cuellar+), Hilda and Ivan Solis, and Dr. Raul and Leticia Cantu, paternal aunts and uncles, Alfred Cavazos, Frank Cavazos Jr. (Karen Sanders), Jimmy and (Cathy) Cavazos, Cynthia and (Wesley) Long, Bobby and (Mary) Cavazos, Glenda and (Abe) Suarez. Visitation will be Saturday, March 6th, 10 am-9 pm and Sunday, March 7th, 1 pm-9 pm, with a rosary at 6 pm both evenings. Sunday's rosary will be followed by a time for sharing of stories. Mass will be held Monday and services will be private, followed by a burial at 11 am at Highland Memorial Park in Weslaco. Sunday and Monday's services will be live-streamed via youtube and Facebook. "Check on your "happy" friends, check on your lonely friends, depression is real."- JASON SCOTT CAVAZOS #depressionisreal #suicideawareness Rosary will be streamed live on https://www.youtube.com/watch?v=X8NMWAoCyms and FM 89.5.

Weslaco-Jason Scott Cavazos, 31, passed away suddenly on Sunday, February 28th, 2021, at his home in Weslaco. On June 24th, 1989, Jason was born to Johnny Ray and Mary Lou Cantu Cavazos in McAllen, Texas. Jason was the younger brother of Johnny... View Obituary & Service Information

The family of Jason Scott Cavazos created this Life Tributes page to make it easy to share your memories.

Send flowers to the Cavazos family.