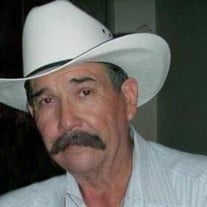 Weslaco: Jesus Garza Jr., 70, went to eternal rest on Saturday, December 26, 2020, at Knapp Medical Center in Weslaco. On July 5, 1950, Jesus Jr. was born to Jesus Garza Sr. and Anita Ojeda Garza in Weslaco, Texas. Jesus grew up in Weslaco, one of fourteen children. He met his future wife and soulmate, Isdora Sanchez, when he was in high school. They courted for ten years and were married on June 23, 1979, at Sacred Heart Catholic Church in Mercedes. Jesus worked at Elmer Stoll, as a fieldman at a local packing shed, for eight years. Jesus went to work as a Compliance Investigator for the Onion and Citrus Committee for the next twenty-five years until he retired. Jesus also worked for the Weslaco School District for five years in the ISS department. Jesus and Isdora raised three children. Jesus remained loyal to his alma mater, the Weslaco Panthers, and the family attended most of the games. Jesus was a jack of all trades, and in his spare time, he built the family home on their ten-acre plot of land. He was a talented carpenter, mechanic, and welder. There was no trade or skill that Jesus didn’t try to learn, and most of the time, he became quite proficient. Jesus loved to spend time with his family. He never missed any of his grandchildren’s events, from baseball to ballet recitals. Jesus was their biggest fan. Jesus was a devoted follower of Christ and attended the Catholic church. He led by example, and his word was his bond. Jesus was a respected member of the community, and many would seek him out for his knowledge of produce. He never stopped working, but he loved even harder than he worked. Jesus is preceded in death by his parents, Jesus Sr. and Anita Garza. He is survived by his loving wife, Isdora, daughters, Crystal Garza-Reyes (Rudy), Ann Marie Garza-Grimaldo (Arturo), son, Jesus Garza III, grandchildren, Javier Garza, Dezirae Garza, Natalya Grimaldo, Caylee Reyes, Zoey Grimaldo, Rudolfo Jesus “RJ” Reyes, Sofia Grimaldo, and Arturo Grimaldo, siblings, Anita Peterson (Jerry), Aurelio Garza (Maria), Rolando Garza (Beth), Joel Garza (Alma), Alfredo Garza, Joe Garza (Isela), Alfonso Garza (Alma), Antonio Garza, Maggie Gonzales (Ernest), Isabel Robles (Luis), Irene Almagar (Cesar), Maria Moreno (Jose), Nina Cantu (Rogelio), closest nieces and nephew, Veronica Garza, Jessica Garza, and Aurelio Garza Jr., honorary grandchildren, Keira Tamez, Jaelynn Salazar, and Jeremy Salazar. Visitation will be Wednesday, December 30th, 10 am-9 pm, with a rosary at 7 pm.

The family of Jesus Garza Jr. created this Life Tributes page to make it easy to share your memories.