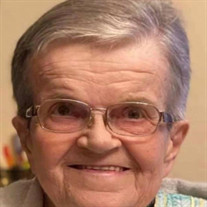 Mission: Jo Anne Ganser, 83, passed away at Aurora House in Weslaco on May 4, 2021. On May 4, 1938, Jo Anne was born to Armond Gemar and Laura Harris Gemarin Oakes, North Dakota. Jo Anne married Dennis Heiden, and they had seven children, six sons, and one daughter. Jo Anne and Dennis lost their only daughter, Tamara, who passed away at the age of five due to an illness, and her husband, Dennis, was killed in Germany at the age of thirty-three, leaving Jo Anne a widow with six boys to raise. Jo Anne remarried Max Ganser, and he was a great husband and had one more son together. Jo Anne was a model homemaker. She loved to cook and bake. Jo Anne was a tireless volunteer, from school projects when the boys were younger to cooking for all of the American Legion events in McAllen. Jo Anne volunteered at the American Legion almost every weekend for over twenty years and took on buying the groceries and running the snack bar. She was also active in the VFW and a supportive military wife. Jo Anne was a dog lover. She enjoyed ceramics, bowling, and watching sports. Jo Anne’s favorite pastime was keeping up with the news and world events. She was a great listener and counselor to her sons and grandchildren. Jo Anne’s common-sense approach to life, colorful sayings and expressions, and the generosity she demonstrated will carry on for generations to come. Jo Anne is preceded by her parents, Armond and Laura Gemar, first husband, Dennis Heiden, and daughter, Tamara Heiden. She is survived by her husband of fifty years, Max Ganser, sons Armond Eugene Myrick (Pat), Dennis George Heiden Jr.(Jan), Ronald Heiden, Marty Heiden (Jennifer), Daryl Heiden (Diane), Milo Heiden (Shelley), and Marc Ganser, eighteen grandchildren, and nineteen great-grandchildren, and her favorite dog, a chihuahua named Chica.

The family of JoAnne Ganser created this Life Tributes page to make it easy to share your memories.

Send flowers to the Ganser family.