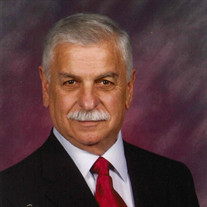 WESLACO - Joel (Joe) A. Garza, 84, of Weslaco passed away peacefully at home on Monday June 21, 2021 after a brief illness, surrounded by his loved ones. Joe was born on April 18, 1937 in Weslaco, Texas to the family of Victor Garza and Josefa Martinez Garza. As a child, he attended St. Joan of Arc Catholic School. As a young man he graduated from Weslaco High School in 1956, playing a pivotal role as a running back (#22) in taking the Weslaco Panther football team to the State Semi-finals in 1955. Joe also attended St. Mary’s University in San Antonio, and served in the Army of the United States with the Texas National Guard from 1954-1960, which included attendance in the Advanced Armor NCO School in Fort Knox, Kentucky, and was Honorably Discharged in 1962. Joe was united in marriage with Maria Evangelina Hinojosa in September 1961, and they settled in Weslaco. This September would have marked their 60th wedding anniversary. Joe then began his employment with the Texas Department of Public Welfare in 1962 as a social worker and retired as a program director from the Texas Department of Human Services in 1990. As an employee of the State of Texas, Joe served as an administrator over the Medicaid, Food Stamp, and Aid to Families with Dependent Children programs. He also administered programs for the disabled, blind, elderly, and those who required vocational rehabilitation. Joe went above and beyond the scope of his employment to promote the well-being of the people of the State of Texas, and especially the local community, serving in numerous civic, religious and volunteer organizations. Among them, he served with the Knights of Columbus since 1960, the Boy Scouts of America, American Cancer Society, Valley Interfaith, Weslaco Catholic Federal Credit Union, and multiple church committees. He was also very active in city politics serving on various civic committees; most notably he was instrumental in developing Single Member Districts in Weslaco. Joe contributed greatly to his community and family. He also took great pride in his agricultural pursuits, having been an avocado grower since 1965. He was also a citrus grower since 1990 and took great lengths to grow all of his produce organically. Joe also farmed various vegetable crops both in the United States and Mexico. Joe is preceded in death by his parents, Victor and Josefa Garza, his brother Humberto Garza (Viola), and two sisters, Maria Cuellar(Ruben) and Nora Perez. He is survived by his brother, Victor Garza (Elva), and brother-in-law, Claudio Perez. Joe felt great pride for, and is also survived by, his wife, Evangelina (Vangie), his children, Cynthia Cardenas (Gilbert), Melinda Garza (Bernie), Jaime Garza (Terri), Judith Blas (Jesse), Angela Cantu (Robert), and Joel Garza (Lindsey), and his 17 grandchildren who always looked to him for guidance, support, and a good laugh. Joe also felt great love and connection to his many in-laws, nephews and nieces, and many friends. Joe will be most remembered as a feisty man, devoted to social justice and to lifting up those around him, as well as a man who had a joke or story for every situation. Joe never met a stranger, and his beautiful and meticulously kept home was open to all, welcome to come and eat, drink, or “shoot the bull.” Joe was an outstanding man who enriched the lives of all who were privileged to know him, and he will be truly missed. Finally, Joe will always be remembered for his famous sign-off: Hasta Pronto. Funeral arrangements are under the direction of McCaleb Funeral Home in Weslaco, TX. Visitation will be held from 2 pm – 9 pm, on Thursday, June 24, 2021, with a Rosary at 7 pm. Livestream will begin at 7pm via YouTube: https://youtu.be/f8dDGzwuOio. Funeral Mass will be held on Friday, June 25, 2021 at 10 am at St. Joan of Arc Catholic Church, in Weslaco, TX. Serving as pallbearers are grandsons, Marcos & Lucas Cardenas, Cristian Farias, Joseph Garza, Noel Cantu, and Joshua Blas. Honorary pallbearers, Carlos & Nicholas Cardenas, Javier Garza, Jacob Blas, Michael Cantu, Sebastian Garza. Interment will follow at Highland Memorial Park with Military Honors in Weslaco, TX. The family would like to thank Elara Hospice Services, with a special thanks to caregivers, Editt Leal, Marina Rodriguez & Pedro Del Angel.

WESLACO - Joel (Joe) A. Garza, 84, of Weslaco passed away peacefully at home on Monday June 21, 2021 after a brief illness, surrounded by his loved ones. Joe was born on April 18, 1937 in Weslaco, Texas to the family of Victor Garza and Josefa... View Obituary & Service Information

The family of Joel (Joe) A. Garza created this Life Tributes page to make it easy to share your memories.