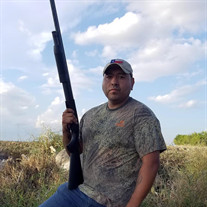 Weslaco-Jorge Baez Jr., 40, passed away on Wednesday, September 28th, 2021, in Hidalgo County. On August 15th, 1981, Jorge was born to Jorge Baez Sr. and Rosa Linda Baez in Dowagiac, Michigan. Jorge moved to Alamo when he was a young boy. After graduating from South Palm Gardens and the age of seventeen. Jorge joined the National Guard and the United States Army full time at the age of 19. Jorge served twice in Iraq as an 88M and earned numerous awards, including the army commendation medal, global war on terrorism expeditionary medal, Iraq campaign medal, to name a few. However, Jorge was just getting started when an injury cut his career short. He was honorably discharged after serving eight years. He then attended South Texas College pursuing a degree in computer science. Jorge was a huge San Francisco 49ers fan. He never missed a game and loved cheering them on with his youngest son Evan. He would shout along with his son his favorite phrase “Who’s got it better than us? NO BODY!”. He enjoyed hosting the UFC fights, boxing, and NFL game at his home enjoying the company of his family and friends. In addition, Jorge enjoyed fishing, white wing hunting, deer hunting, camping, playing pool, and bowling. He also enjoyed splurging on ice cream, Hawaiian Pizza, and Big Macs with his son. Jorge enjoyed watching classic television shows and shared that love with his children. He loved his Chevy pickup truck and was a clean-cut, no-nonsense kind of guy. He learned to be a handyman assisting his mother on several occasions. He did his best as he could considering he was the oldest and only brother for his sisters. Overall, he brought laughter to every occasion making sure everyone in his presence had a great time. Jorge is preceded in death by his father, Jorge Baez Sr, maternal grandparents, Inocencio and Maria Cruz Torres, and paternal grandparents, Perfecto and Maria Elena Baez. He is survived by his wife, Ramona Baez, mom, Rosa Linda Baez, children, Jorge Alberto Baez, Jeremy Angel Baez, Javier Alejandro Baez, Cienna Mylee Baez, and Evan Eskel Baez, and sisters, Brenda Salazar (Tomas Salazar), Linda Baez, and Julie Trevino (Priscilla Lopez). On Monday, October 4th, 1-9 pm, Visitation will be at McCaleb Funeral Home in Weslaco. On Tuesday, October 5th, 10 am, a celebration of life will be held at McCaleb Funeral Home, followed by a burial at Sacred Park Cemetery in Mercedes. Serving as pallbearers will be Tomas Salazar, Marco Torres, Jesus Tores, Alex Carillo, Ricardo de la Serna, Mark A. Cortez, and Evan Baez.

Weslaco-Jorge Baez Jr., 40, passed away on Wednesday, September 28th, 2021, in Hidalgo County. On August 15th, 1981, Jorge was born to Jorge Baez Sr. and Rosa Linda Baez in Dowagiac, Michigan. Jorge moved to Alamo when he was a young boy. After... View Obituary & Service Information

The family of Jorge Baez Jr. created this Life Tributes page to make it easy to share your memories.

Send flowers to the Baez family.