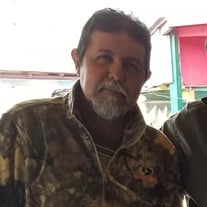 Weslaco: Jose Luis Ibarra, 61, passed away at his home on Monday, March 28th, 2022, after being diagnosed with cancer on March 4th. Jose was born on March 19th, 1961 to Genaro and Sara (Hernandez) Ibarra in Harlingen, Texas. Jose, the second born of five children, grew up in Harlingen and graduated from Harlingen high school. He was active in almost every sport offered, baseball, basketball, football, and he also played the trumpet in the band. Jose was a “jack of all trades.” He could play any sport, pick up an instrument and learn to play, work on any electronics, and build about anything that you could dream up. He met Abby Charles shortly after high school, and they married in 1984. Jose and Abby were a perfect match, wholly opposite in many ways, but an ideal balance. They raised their three children in Weslaco. Jose went to work for a construction company, SAL Construction, where he worked for the next thirty years. Although Jose worked in construction all week, when he came home on Friday afternoon, he still found time to work around the house, on cars, or in the yard. His kids fondly referred to their dad as MacGyver; after the hit series, many remember a genius-level intellect who seemingly had endless skills. When Jose wasn’t fixing things or creating something with his hands, he loved the outdoors. He loved to go fishing and spend the day at the beach with his girls and grandchildren. However, Jose was most passionate about NASCAR and racing cars. He and Abby would spend many evenings at the drag races in Edinburg, and Jose could spend hours watching NASCAR and cheering on Dale Earnhardt. Jose was mild-mannered, easy-going, and a man of few words. He had a witty personality with just the right sarcasm to keep you on your toes. Jose is preceded in death by his daughter, Bianca Ibarra, mother and father-in-law, Rogelio and Abeldia Charles, brothers in law Jesus, German, and Homero Lopez. He is survived by his loving wife, Abbey, parents, Genaro and Sara Ibarra, daughters, Diandra Ibarra and Tesla Ibarra, grandchildren, Jordan Vasquez, Jax Vasquez, Jayda Ibarra, Jayden Valdez, and Alexander Valdez, brothers, Genaro Ibarra Jr., Frank Ibarra (Gabby), Fred Ibarra (Diane Thornhill), Sara Ray (David+), siblings in law, Salvador Lopez (Angie+), Blanca Herrera (Ambrocio), Paula Lopez, Lupita Lopez, Petra Flores, Maggie Valenzuela (Domingo), Roy Charles (Julie), and Peter Charles, and numerous nieces and nephews. On Saturday, April 2nd, 3-9 pm, Visitation will be at McCaleb Funeral Home in Weslaco.

Weslaco: Jose Luis Ibarra, 61, passed away at his home on Monday, March 28th, 2022, after being diagnosed with cancer on March 4th. Jose was born on March 19th, 1961 to Genaro and Sara (Hernandez) Ibarra in Harlingen, Texas. Jose, the second... View Obituary & Service Information

The family of Jose Luis Ibarra created this Life Tributes page to make it easy to share your memories.

Weslaco: Jose Luis Ibarra, 61, passed away at his home on Monday,...

Send flowers to the Ibarra family.