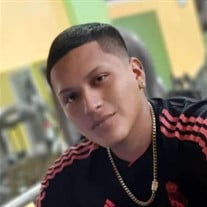 Weslaco- Josue Morales, 20, passed away on Monday, April 20th, after a tragic car accident in Colfax, Michigan. Josue was born on December 13th, 1999, to Juan Antonio Morales and Alma Delia Villarreal in Weslaco, Texas. Josue grew up in Weslaco with three siblings. He learned from an early age the value of a hard day's work. Josue and his family worked as migrants for most of his life. Josue was used to spending summers in Michigan, working in the agriculture industry. He worked hard all of his short life, and Josue was never afraid of a challenge. After Josue lost his father in a tragic car accident, work became an even higher priority to Josue. He always used his earnings to help his family, especially his mom and sister. Josue also loved to have fun. He earned the right, so he and his friends always had a great time at the end of the day. He enjoyed the beach and being around friends and family. Josue was genuine and honest. He loved to make people laugh, a blessing to all who knew him. Josue is preceded in death by his father, Juan Morales. He is survived by his mom, Alma Delia Villarreal, sisters, Gloriana Tamez (Rafael) and Galilea Marie Morales, and brother, Juan Antonio Morales (Maria). Visitation will be Tuesday, April 28th, 1-6:30 pm. A family rosary and time of sharing will begin at 6:30 pm at McCaleb Funeral Home. A graveside service will be Wednesday, April 29th, at 11 am at Sacred Park Cemetery in Mercedes.

The family of Josue Morales created this Life Tributes page to make it easy to share your memories.

Send flowers to the Morales family.