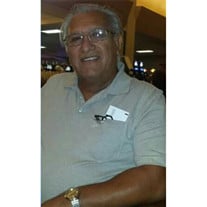 Mercedes-Juan Fuentes Sr., 67, passed away on Tuesday, October 18th, 2016. Juan was born in La Salle, Texas to Jose and Alicia Fuentes. He had four sisters, Cipriana, Maria Adela, Manuela, and Elijiah, and three brothers, Guadalupe, Jose Amado, and Pedro. Juan lost his parents at a very young age, his dad at fifteen and his mom at sixteen. He immediately stepped up as supporter and role model to his three younger brothers who were still living at home. He and his sisters supported and raised his three brothers, but somehow managed to find time to go to a dance at the Mercedes Civic Center when he was eighteen, where he would meet the love of his life, Maria Campos. They were married on November 6th, 1968. They would work hard together migrating up north together to support their family. They had four children, Juan Jr., Josefina, Norma, and Jaime. The family would migrate for many years and later, Juan would become a truck driver. Juan loved to watch boxing, family gatherings and barbecuing. He was a mechanic and a handyman and he loved music. He enjoyed listening to Tejano music and he even played the accordion. His favorite pastime and one of his true joys in life was fishing. He would fish just about anywhere he could. He really enjoyed teaching his grandchildren to fish and just spending time by the water. Juan was preceded in death by his parents, Jose and Alicia Fuentes and his youngest brother, Pedro Fuentes. He is survived by his loving wife of forty nine years, Maria Socorro Fuentes, his children, Juan Fuentes Jr. (Gloria), Josefina Fuentes, Norma Fuentes (Homero Garcia), and Jaime Fuentes (Elizabeth), all of Mercedes, his sisters, Cipriana "Kina" Lucio of Stanton, Texas, Maria Adela Hernandez of Mercedes, Texas, Manuela Rincon of Mercedes, Texas, Elijia "Cuca" Gonzalez of Wichita, Kansas, his brothers Guadalupe "Lupe" also known as "Blue" to each other and Jose Amado Fuentes both from Mercedes, Texas. Visitation will be held on Friday, October 21st, from 12noon till 9pm, with a rosary at 7pm. Mass will be celebrated on Saturday, at 10am, at Sacred Heart Catholic Church in Mercedes, with Father Eduardo Ortega officiating. Burial will follow at Sacred Park Cemetery in Mercedes. Funeral arrangements are under the care of McCaleb Funeral Home of Weslaco.

The family of Juan Fuentes Sr. created this Life Tributes page to make it easy to share your memories.