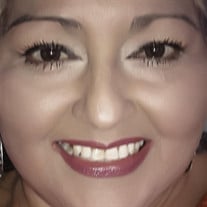 The Lord rejoiced with the homecoming of his daughter, Juanita “Quitona” Chavez on August 17, 2020. She was 59 beautiful years young. Janie was born to Jose Guadalupe Aguirre and Maria Del Refugio Aguirre on January 21, 1961, in Weslaco TX. As a child, when Janie was not helping with the family stand at the Mercedes Flea Market, she enjoyed spending time with her family and friends. Her siblings describe her as fun and loving, as well as being the “peacemaker” of the family. She left them with many childhood memories including dancing at Mario’s Bad Bull; however, that did not come before completing the family chores (even if that meant driving with the truck bed overflowing with pig food)! In the words of her sister Alma, “we just wanted to dance!” Other days were spent riding around town with her siblings on their bikes; even serving as her sister Mary’s bike “limo” driver for prom. On that day, she could be seen pedaling down the streets of down town Weslaco, with Mary sitting on the handlebars. There was no stopping her from having a good time, and sharing laughs and love with her family. Janie met her husband, Jesus Chavez, in 1978, as they shared a class at Weslaco High School. It only took one glace before she asked, “Hey, who’s that?” (Special thanks to Margie Carreon, who led the introduction to what would be the start of a lifetime love). As remembered by her husband, Janie spent her days showing her interest by leaving him love notes under his books, but would nervously hide behind others as he approached her. Janie is also remembered as describing her love and admiration for her husband since her early years. He says, “She gave me a kiss and never let go. That’s how she stole me.” They married on September 30th of 1983, and went on to create an amazing love and built a beautiful family for the next 37 years. During that time, they were blessed with three daughters; who in turn, blessed Janie with eight grandchildren. They were her pride and joy! Her eyes would light up with every, “Hi Grandma, I love you!” Having her as a grandmother was like Heaven on Earth for her grandchildren; her hugs were tight, her love was grand, and her smile was infectious. Layla, her granddaughter, describes her as, “an angel sent from the Heavens to carry out God’s good will.” Together with her family, Janie spent her days enjoying movie dates, making family favorite dinners, sharing laughs, making memories, and as said by her granddaughter Jovanni, taking special enjoyment in “laughing at her own jokes.” Most recently, she spent her days playing cards with her husband (and losing… then getting fussy because she lost). Janie was also blessed with the privilege of caring for her mother. Together they created precious memories, which she held near and dear to her heart. She believed that to care for those who once cared for her was one of the highest honors. Janie was a devoted wife, mother, and daughter. She lived her life mimicking our Father. She was the first to “welcome the sinners and eat with them.” She loved with no limits and listened without judgement. She was quick to forgive and did so whole-heartedly. She was so strong in her faith that she had the trust and willpower to give it all to God. Her family finds comfort in knowing Janie is rejoicing in Heaven’s Glory, reunited with her father, Jose Guadalupe Aguirre, mother-in-law, Margarita Chavez, father-in-law, Federico Chavez, sister, Graciela Gonzalez, and her grand pup, Chronus. Loving her was a privilege, and knowing her was a blessing. Many are left to cherish her memories, including her soulmate, Jesus Chavez; children, Jessica Chavez (Joe), Jenna Chavez (Ashley), Jayme Chavez (Steven); grandchildren, Jared A. Burnias, Jaden A. Burnias, Jolyn A. Burnias, Jonah A. Burnias, Jovanni A. Iglesias, Hailey A. Escobedo, Layla A. Escobedo, and Austin J. Escobedo; grand pup, Coco; siblings, Maria Dolores Garza, Maricela Rodriguez (Alfredo), Guadalupe Aguirre Jr. (Mary) Maria de Jesus Castillo (Alfredo), Alma Marines (Javier), Armando Aguirre (Myrtha); and in-laws, Rosalva Saldana (Leobardo), Federico Chavez Jr. (Linda), Oscar Chavez, Maria Elena Van Vactor (Steven), Rodolfo (Mary) Chavez, Rolando (Gloria) Chavez, Elvira Cuellar (Guillermo), Jose Luis (Silvia), and Imelda Lopez (Elijio). Due to current circumstances, the viewing will be restricted to immediate family only. The family extends the opportunity to lead Janie Chavez in her passage to Heaven through the prayer of the Holy Rosary. An online viewing will be held on Saturday, August 22nd, at 7 pm. Burial and mass arrangements will be held at a later date (TBD) and will also be available through online viewing. Thank you for your continued prayers and understanding. With love, The Chavez Family “Do not let your hearts be troubled. You believe in God; believe also in me. My Father’s house has many rooms; if that were not so, would I have told you that I am going there to prepare a place for you? And if I go and prepare a place for you, I will come back and take you to be with me that you also may be where I am.” (John 14: 1-3)

The Lord rejoiced with the homecoming of his daughter, Juanita &#8220;Quitona&#8221; Chavez on August 17, 2020. She was 59 beautiful years young. Janie was born to Jose Guadalupe Aguirre and Maria Del Refugio Aguirre on January 21, 1961, in... View Obituary & Service Information

The family of Juanita Chavez created this Life Tributes page to make it easy to share your memories.

The Lord rejoiced with the homecoming of his daughter, Juanita...

Send flowers to the Chavez family.