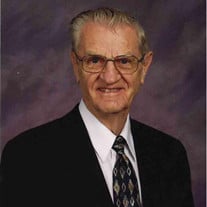 WESLACO - Kenneth M. Peterson, 94, of Weslaco, TX, formerly of Kerkhoven, died Saturday, December 21st at Valley Grande Manor in Weslaco, TX. His memorial service will be at 10:30 am, Friday, January 3rd at Bethel Baptist Church in Kerkhoven. Visitation will be from 9-10:30 am, on Friday at the church. Interment with Military Honors will be at Hillside Cemetery in Kerkhoven. Ken Peterson was born to Edwin and Signe Peterson on May 20, 1925, in Eveleth, MN. When he was two years old his family moved to Kerkhoven where his father, Pastor E.B. Peterson, was called to be the Pastor of Bethel Baptist Church. They lived in the parsonage next to the church for ten years. Ken accepted the Lord as his Savior at the age of six at church. After his father resigned from the ministry he took over the management of three collapsing telephone exchanges-Kerkhoven, Murdock, and Pennock. He merged them into the KMP Telephone Company. Ken graduated from Kerkhoven High School in 1943. He enlisted in the US Navy for two years (1944-46). During that time he attended college at Texas A&M where he took courses in radio technology. He was stationed in Indianapolis, NY City, Hawaii, and Guam. He was a first-class radioman in Guam during WWII. In 1946 he came home from the Navy and started working with his father in the telephone industry. On June 14, 1947, he married Audrey Egerstrom of Murdock, MN. To this union, two children were born-Renee’ Beth on February 10, 1951, and Dean Edwin on March 6, 1955. During Ken’s years in Kerkhoven, he was active in local affairs. He served on the village council, was a Boy Scout leader, president of the Hillside Cemetery Association, Lion’s Club member, member of the village golf club, on the MN Telephone Association Board, on Kerkhoven State Bank board, served on the Board of Appleton Television Station and the Christian radio station in Milbank, SD. His main interest was Bethel Baptist Church where he served in many different positions from custodian to church chairman. He taught the adult Sunday school class for many years. He was a choir member and sang in the men’s quartet. After the death of his father, Ken became the owner-manager of the KMP Telephone Company. Many changes and improvements were made over the years. The villages of Sunburg, Brooten, Sedan, and Terrace were added to create Mid State Telephone Company of Spicer. The company was sold in 1990 to Telephone and Data Systems of Chicago. In 1983 Ken and Audrey spent their first winter in Weslaco, Texas. For the first number of winters, they lived at Lakeview Park where Ken served on the park board. In 1990, Ken retired at the age of 65. In 1999 they moved into John Knox retirement village in Weslaco, Texas. They started spending more and more time in Texas and in 2008 decided to sell their home in Kerkhoven and move to Texas permanently. Ken served as VP of John Knox Resident Council. He was also in charge of White Elephant sales- selling donated items from residents that lived at John Knox Village. Ken and Audrey attended First Baptist Church of Weslaco. Ken taught the Senior Men’s Sunday School Class for years. In the fall of 2017, Ken and Audrey moved into the Med Center at John Knox Village as they both had dementia and needed full-time care. Ken was preceded in death by his parents: Edwin and Signe Peterson; siblings: Glenn (Marty) Peterson, Gordy (Gladys) Peterson, Millie (Louis) Kraakevik, Bernice (Burt) Carlson, and Ruth (Bert) Wessman. He is survived by children: Renee’ (Glenn) Larsen from Grand Marais, MN, and Dean (Betsy) Peterson from Glenwood, MN; 5 granddaughters: Holly (Benjamin) Hilty, Heather (Michael) Vedders, Heidi (Mitchell) Vedders, Rachelle Peterson, and Alissa Peterson; 11 great-grandchildren: Elsie, Rylee, and Kinsley, children of Michael and Heather Vedders. Jedidiah, Maridee, Levi, and Evie, children of Mitchell and Heidi Vedders. Aliyah, Michael, Layla, and Livia, children of Alissa Peterson.

The family of Kenneth Milton Peterson created this Life Tributes page to make it easy to share your memories.