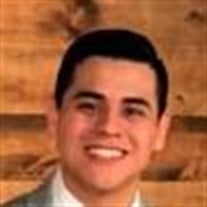 Weslaco - Kevin Michael Saenz, 25, entered into his eternal resting place with Christ on Thursday, October 24, 2019, as the result of an automobile accident. Kevin was born on April 27, 1994, to Sylvestre and Norma Saenz in McAllen, Texas. He was born and raised in the city of Weslaco. Kevin was the youngest of three brothers, who he admired, respected, and loved. The brothers fed off each others’ competitiveness, including Kevin, the youngest, who never seemed to back down. They played every sport imaginable, football, baseball, golf, and basketball were some of his favorites. Many broken windows, scrapes, scars, and bruises were the norm, and Kevin couldn’t get enough. Despite the competitiveness, there was plenty of love and forgiveness. Kevin never held any grudges and anger was not a common friend. Kevin continued his competitive spirit during high school, where he excelled in basketball at Weslaco East. He was a three-year varsity player and helped lead the Wildcats to the playoffs during his junior and senior seasons. He also began to embrace his natural charismatic personality that seemed to be a magnet for people. Kevin left his mark during high school but always knew his true calling, which was to become a pastor and a voice for Christ. After graduating from high school, Kevin attended Valor Christian College in Columbus, Ohio, where he earned an associate's degree in Pastoral Leadership. At the same time, Kevin also began to pursue his future wife, Niki Longoria, who he met at a youth church camp when they were both teenagers. His competitive spirit and drive earned him another win. After countless requests and rejections, Niki finally agreed to be his girlfriend, and the two were a natural match. Niki couldn’t resist his tenacity and love. He knew she was the girl for him even though they were miles apart. Being a hopeless romantic, Kevin, along with a family full of supporters, drove to Texas A&M in College Station to surprise Niki and ask for her hand in marriage. They became husband and wife on October 28, 2017. Though their marriage was cut short, their life together was full of love and happiness. They took a priceless trip to Disneyland for Niki’s birthday in January of 2019. Niki also embraced Kevin’s passion for serving the Lord. Kevin led many people to Christ in his short time on Earth, and being a pastor was genuinely his calling. Kevin wanted everyone to know Jesus and to be “set free.” Kevin introduced “Project 83,” which, at its heart, was aimed at reaching the city of Weslaco and the Rio Grande Valley as a whole. Behind Project 83, the church began to reach out to the community through free car washes, offering free food to the public, being a recent member of Al Fresco in Weslaco, and even served Thanksgiving Dinner to the First Responders of Weslaco in 2018. Kevin continued to enjoy sports as he grew up. He still loved basketball and a round of golf, enjoying video games, board games, especially monopoly, and eating pizza. He also recently became an Ambassador of Guest Relations at DHR in Edinburg, a job that suited him perfectly. Kevin touched countless lives in his short stay on Earth. He was always happy, cheerful, and positive. Kevin loved all people and believed in forgiveness for all. He was an amazing young man who chose to live his purpose, serving God and others. Kevin is preceded in death by his paternal grandparents, Evaristo and Brijida G. Saenz and his maternal grandfather, Francisco Lopez. He is survived by his loving wife, Niki Saenz, maternal grandmother, Elisa Lopez, parents, Sylvestre and Norma Saenz, of Weslaco, brothers, Errek and wife Wendy, of Weslaco, Michael and wife, Abby, of Mercedes, nephews, Marcus and Xander Saenz, Levi and Andrew Rincon, niece, Gwen Saenz, and his favorite dog Bentley. Visitation will be Tuesday, October 29, 2019, from 10:00 a.m. - 9:00 p.m. at McCaleb Funeral Home Chapel, with a prayer service at 6:00 p.m. Funeral service, will be Wednesday, October 30, at 11:00 a.m., at Templo Ebenezer in Weslaco. Burial will follow at Sacred Park Cemetery in Mercedes.

Weslaco - Kevin Michael Saenz, 25, entered into his eternal resting place with Christ on Thursday, October 24, 2019, as the result of an automobile accident. Kevin was born on April 27, 1994, to Sylvestre and Norma Saenz in McAllen, Texas.... View Obituary & Service Information

The family of Kevin Michael Saenz created this Life Tributes page to make it easy to share your memories.

Send flowers to the Saenz family.