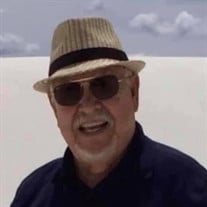 Weslaco- Lazaro Cardenas, 85, of Weslaco, Texas entered eternal rest on Friday, January 29, 2021. Lazaro was born on May 14, 1935 to Percopio Cardenas and Anita Cardenas, a pioneer family of Weslaco, Texas. Lazaro is preceded in death by his wife Eloisa Calderon Cardenas, survived in death by his spouse Teresa Rodriguez Begley, his children and their partners Diana Golestani and Reza Golestani, Lazaro Cardenas Jr. and Alicia Cardenas, and Juan Cardenas and Thelma Cardenas. Lazaro will be lovingly remembered by numerous grandchildren, great-grandchildren, sisters, brothers, nieces, nephews, cousins, friends and family. Lazaro was first and foremost a faithful servant of God. He grew up in his hometown of Weslaco, Texas where he attended Weslaco High School and graduated class of 1955. Lazaro was a decorated Panther football player and avid Weslaco High Panther fan. During his high school football career, Lazaro was the first Hispanic quarterback to win a Weslaco Panther playoff game. Among other high school activities, Lazaro also participated in student council and as a sports reporter for The High-life Newspaper. He continuously supported local athletics throughout his lifetime, seldom missing a game or sporting event. He shared his support and passion of politics with many others in hopes of giving back to his beloved city. Lazaro will be greatly missed within the entire Weslaco community. Lazaro served in the United States Air Force for 21 and half years as a Technical Sergeant. He was a crew member on B-52, KC-135, and Caribou aircraft. Throughout his time serving in the Vietnam War he completed over 100 missions and was awarded the Bronze Star. Lazaro took great pride in his service to the country he loved. During his time in the Air Force Lazaro traveled the world and spent several years living overseas and across the United States. He was stationed in various places throughout his service including, Texas, Illinois, California, Georgia, Florida, and Okinawa, Japan. During his time in Orlando, Florida, Lazaro graduated with his degree in Education from Florida Southern College in 1971. With great love for his community and academics, Lazaro returned home and spent many years as an educator at both the high school and college level. During his time as a professor, Lazaro was a member of the Harlingen Kiwanis Club at TSTI now known as TSTC. Lazaro’s entrepreneurial spirit enabled him to open Sacame Bail Bonds which he successfully ran for many years. Unfortunately during this time, Lazaro said goodbye to his beautiful wife Ellie who passed in 1999 after a battle with cancer. Lazaro spent his retirement years traveling, fishing, supporting his grandchildren at athletic events and spending time with friends and family. He was reunited with his high school sweetheart Teresa in June of 2016. They were married in 2017 and spent their time between Weslaco and Pauls Valley, Oklahoma. Lazaro genuinely cherished his friends and community from Oklahoma. He became an active member of their church and spearheaded the efforts of raising money to provide a new roof for the church. Lazaro battled COVID for 6 weeks before succumbing to complications from the virus. He will thoughtfully be remembered by his joyous personality, strong-willed character, and cheerful singing. Lazaro was a man of great passion and dedication. His momentous spirit will forever translate through those who loved him and knew him.

Weslaco- Lazaro Cardenas, 85, of Weslaco, Texas entered eternal rest on Friday, January 29, 2021. Lazaro was born on May 14, 1935 to Percopio Cardenas and Anita Cardenas, a pioneer family of Weslaco, Texas. Lazaro is preceded in death by... View Obituary & Service Information

The family of Lazaro Cardenas Sr. created this Life Tributes page to make it easy to share your memories.

Send flowers to the Cardenas family.