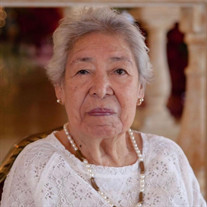 WESLACO/PROGRESO LAKES - Maria Dolores (Lola) Perez passed away on March 22, 2022 surrounded by her loving family in San Antonio. She was born on March 23, 1929 to Nicolas and Francisca Flores. Lola was an active soul that enjoyed gardening, crocheting, embroidery, sewing, cooking, and of course spending time with her grandchildren and great-grandchildren. She enjoyed the many flowers in her garden but most of all, her roses. Lola would find peace walking in her garden with her grandchildren to show them an appreciation for nature's beauty that her green thumb helped create. She was also known for always having a ball of yarn nearby wherever she was sitting. Bags and bags of yarn were used in making booties, vests, blankets, pillows, doilies, etc. Each item she crocheted was filled with her love for the recipient, which was usually her children, and grandchildren. She tried teaching her grandchildren and great-grandchildren the art of crocheting, but most times her fingers were too fast for their youthful eyes to keep up with. Lola also found pleasure in cooking and was a self-taught cook. No measuring cups for this vibrant lady. She had the affinity for making the simplest of meals feel like Thanksgiving dinner. With a large family on a budget, she was always able to ensure everyone went about their day with a belly full of her delicious cooking. She enjoyed the fact that her cooking was included in a movie with one of her favorite actresses, Lola Beltrán. Her tamales, gorditas, and tortillas have yet to be duplicated to her perfection. Any visitor to her home was never allowed to leave on an empty stomach or with empty hands. She was a giving soul and made sure bellies and refrigerators were full when you came to visit. She also had a creative streak within her that allowed her to recreate clothing without a pattern and sometimes of her own design. She would collect material regularly (her stash was incredible) for quilts, dresses, shirts, dolls, etc. You name it, and Lola would try her hands at successfully making it. She also had a knack for her grandmother's healing hands. Whether it be with gorditas, tortillas, potatoes, a good nap by her side, or the occasional "sana sana", Lola was able to comfort her grandchildren when they fell ill. Her purse was also always with pieces of gum that anytime she was asked to dig in it for quarters, the minty smell would hit nasal passages close by. Lola had a spunk for life and a unique sense of humor. As her family grew, so did the creation of her own language. From words like "churas" and "pos pos", Lola created something her family would cherish and keep with them forever (and later learn were not real words). She knew her family shared a bond like no other that defining such words was never needed, but automatically understood. She also had a giggle about her when she would hear an inside joke or make a comment that only some would get. It was one of those moments that would make some question what was going on, but the fortunate few smiled and lit up because they knew. She enjoyed making people feel special and cared for with those tiny moments. She had a loving hand in raising eight amazing children, six grandchildren, and 13 great-grandchildren who will dearly miss her. However, her love, memories, and life lessons will continue in the hearts of her family and loved ones, who were truly blessed to have had her for almost 93 years. She is preceded in death by her husband of 67 years, Bernardo Perez. Lola is survived by her children Maria Perez (George Garrett-Weslaco), Eliazar Perez (Beverly-Colleyville), Dolores Garcia (Manuel Jr.-Weslaco), Oralia Huggins (Robert-San Antonio), Luis Perez (Flor-Weslaco), Francisca Vega (Roberto-Weslaco), Refugio Perez (Silvia-Tomball), Ricardo Perez (Rachel-San Antonio) and her grandchildren Robert Jr., Mark, Consuelo, Bernadette, Benjamin, and John. Along with numerous great-grandchildren. A private family graveside service will be held for her at a later date.

WESLACO/PROGRESO LAKES - Maria Dolores (Lola) Perez passed away on March 22, 2022 surrounded by her loving family in San Antonio. She was born on March 23, 1929 to Nicolas and Francisca Flores. Lola was an active soul that enjoyed gardening,... View Obituary & Service Information

The family of Maria Dolores "Lola" Perez created this Life Tributes page to make it easy to share your memories.

Send flowers to the Perez family.