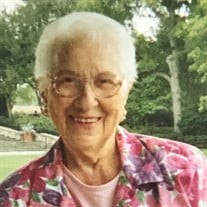 Weslaco/Garland- Mary Jane Adams, 102, was reunited with her family in Heaven on April 15, 2020. She was at Legend Oaks Nursing Home in Garland, Texas. Mary was born on December 14, 1917, in Jones, Oklahoma, to Fred L. Wilson and Frankie Myers Wilson. She grew up with her seven siblings in Oklahoma. Mary married Glen Adams December 28, 1941. After he returned from serving in the US Army, the couple moved to Weslaco, Texas, where they would raise their family. Glen was a mechanic and spent his career working at Williamson Dickies. Mary cared for their two daughters, but also worked as a teller at First National Bank. It wasn't long before Glen's parents decided to move to Weslaco, where they opened Adam's grocery store and lived in a guest house behind Glen and Mary's home. The arrangement was great for raising the girls. The family was always vital to the Adams family. They enjoyed large gatherings and entertained the whole Adams, Sasser, and Wilson, families. They also enjoyed lots of time with Mary's family, from huge family reunions to meals and road trips back to Oklahoma. Mary loved to cook and welcomed large groups, especially family members. Everything Mary made was delicious, but her famous chocolate cake was a family favorite. Mary's siblings remained very close throughout their adult lives and nicknamed their group of eight siblings, "The Greats." They had a great time together for sure. Glen and Mary had a trailer at the Arroyo, where they spent lots of time. The grandkids fondly remember spending lots of time at "PAR" Camp Arroyo and the famous fish fry dinners that were always a big hit. The Adams family was very active at the First Baptist Church in Weslaco. Mary taught Sunday School and was active in several ladies' Bible study groups. She and Glen both were involved in the Baptist Missions, building homes and churches in Mexico and serving in numerous mission projects. The couple was very active in the community and service. Glen was also a volunteer firefighter, and Mary served on the Weslaco Fireman's Auxiliary. After Glen and Mary retired, they were able to enjoy traveling. The couple purchased a motorhome, nicknamed the "Adams Attic," and they traveled all over the country, including Alaska and Australia. Mary Jane, the "last of the greats," will be remembered by her smiling face. She was always full of laughter and joy. Mary was committed to her faith and was a Godly woman. She was also “the best grandmother anyone could ask for”. Mary is preceded in death by her parents, Fred and Frankie Wilson, her loving husband of fifty years, Glen Adams, daughter, Glenda Jane Blankinship, siblings, Charlie, Warren, Ralph, and Fred Wilson, Lesty Baxter, and Fern Archer. She is survived by her daughter, Judith Ann Williams (Nathaniel "Willie") of Garland, Texas, son-in-law, David Blankinship (Debbie), grandchildren, David Randy Blankinship (Arwen), Mark Blankinship (Tamra), Jacque West (Paul), and Jeffery Williams (Karen), great-grandchildren, Reed, Cassidy, and Graham Blankinship, Catherine Emma and Maggie West. A graveside service will be Tuesday, April 21, at 2 pm, at Highland Memorial Park in Weslaco, officiated by Dr. Rev. Steven K Parker of the First Baptist Church Weslaco. A memorial service will also be held at a later date.

Weslaco/Garland- Mary Jane Adams, 102, was reunited with her family in Heaven on April 15, 2020. She was at Legend Oaks Nursing Home in Garland, Texas. Mary was born on December 14, 1917, in Jones, Oklahoma, to Fred L. Wilson and Frankie Myers... View Obituary & Service Information

The family of Mary Jane Adams created this Life Tributes page to make it easy to share your memories.

Weslaco/Garland- Mary Jane Adams, 102, was reunited with her...

Send flowers to the Adams family.