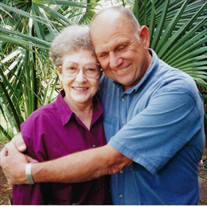 Mary Ann (Wick) Bauer, 79, of La Feria, Texas passed away peacefully in her home on June 13, 2021, with her family by her side. She was born on May 1, 1942, in Rio Hondo to parents, Emil Anton Wick and Marie Pekar Wick and was the youngest of nine children. Mary Ann grew up on the family farm in Rio Hondo. She attended Rio Hondo High School and graduated in 1960. After high school, she moved to San Antonio for work but ultimately was called home to the Valley. Mary Ann married Edward Francis Bauer in 1964. They had five children – James, Robert, Andrew, Amy, and Lori. Her family was the light of her life. When Mary Ann married Edward, not only was it the start of a partnership in their marriage, but it was also the start of a partnership in their farm. She worked tireless hours keeping the books, paying the bills, moving empty cotton trailers and feeding the crew as they picked cotton until well after dark. In true supporting fashion, Mary Ann did whatever needed to be done. Whether it was at the cotton fields in the summertime or the homemade table in her home, she fed a multitude of people with love. Mary Ann was a “second” mother to so many, and there was always an open seat at her table. Her home was warm, welcoming and inviting to all, and she always had an ear to listen to those that needed her. Mary Ann took care of everyone, whatever their need. She was an amazing cook and baker, and there was never a bad meal at the Bauer house. She was known for her sweet tea, homemade kolaches, hot sauce, pickles, peanut patty candy, cinnamon rolls, muffins and all the other delicious creations she made daily. Mary Ann loved visiting in the kitchen while cooking, eating dinner out with Edward and friends, reading murder mysteries, playing the occasional slot machine, spending time with her closest friends, and traveling with her sister and brother-in-law, Mildred and Francis, and all of their children. She was a kind and devoted wife to Edward for 56 years and a loving mother to her children. Mary Ann’s pride and joy was the family she raised with Edward. She will be greatly missed by so many that she leaves behind. Mary Ann was preceded in death by her husband, Edward, parents, Emil and Marie, brothers, Johnnie, Reginald, Terry, Jerome, Frank, Jude, George, sister Mildred, and daughter, Elizabeth Marie. She is survived by her children James and wife Lois; Robert and wife Cissy; Andrew and wife Mayme; Amy and husband Jake; and Lori and husband Chris. Grandchildren Michael and wife Jacy, Lynda and husband Irving, Christian, Elizabeth, Caroline, Piper, Emily, Justin, Tyler, Grace, Charley, Benjamin, Abigail, and Henry. Great-grandchildren Ronan, Emry, and Maven. She leaves behind multiple cousins, nieces and nephews, and many adored friends. A Rosary for both Edward and Mary Ann Bauer (Edward Bauer passed away on January 24, 2021; https://m.youtube.com/watch?v=N1Zv4Niz9PI , services were postponed due to Covid) will be held at 7:00 pm on Sunday, June 27 at McCaleb Funeral Home in Weslaco. Visitation with the family will be from 5:00 – 8:00 pm. A joint Funeral Mass for Edward and Mary Ann will be held at 10:00 am on Monday, June 28 at St. Anthony Catholic Church in Harlingen. Funeral arrangements are under the care of McCaleb Funeral Home of Weslaco.

Mary Ann (Wick) Bauer, 79, of La Feria, Texas passed away peacefully in her home on June 13, 2021, with her family by her side. She was born on May 1, 1942, in Rio Hondo to parents, Emil Anton Wick and Marie Pekar Wick and was the youngest of... View Obituary & Service Information

The family of Mary Ann Bauer created this Life Tributes page to make it easy to share your memories.

Send flowers to the Bauer family.