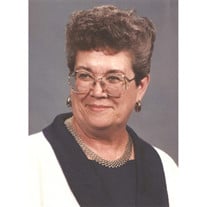 Mary Jeanne Madden Cleckler (Coach) passed away peacefully Saturday morning, September 2nd, 2017. She was born in Breckenridge, Texas on February 22nd, 1933 to Gerald and Roberta Madden and was the oldest of 7 children. She married James W. Cleckler (Cornbread) in 1954, both from Weslaco, Texas. She was a graduate from Texas A&I in Kingsville, Texas with a physical education/health degree and began her coaching career in the valley. Coach Cleckler spent most of her coaching career at Mary Hoge Junior High School in Weslaco, Texas. She taught girls basketball, volleyball and track and field. Coach loved her players and always strived to make her athletes not only the best they could be on the field, but the best they could become off the field. Coach Cleckler's teams won countless district championships, tournament championships and track meet championships. Over the years, Coach loved hearing from her players/students and share their life successes. For over 30 years, Coach Cleckler was an official/statistician for the Texas State High School Girls Basketball Tournament and the annual Texas Relays which determined the state's track and field championships. She and her husband, Cornbread, were also a basketball official team that refereed games from Brownsville to Roma across the Rio Grande Valley. Even with her family, coaching and official duties, Coach Cleckler went back to Pan American University and earned her Masters degree in Education in 1972. In addition to her coaching career in Weslaco, in 1978 Coach Cleckler spent 8 years in the Round Rock School system serving as the athletic director. In 1984, she lost her loving husband, Cornbread. Her enthusiasm for great competition and great sportsmanship translated into all the athletes and students she mentored. Coach Cleckler semi-retired and moved back to Weslaco after enjoying her time in the central Texas area. She taught health and substitute taught at Weslaco High School until her full retirement. As long as she was physically able, she continued to attend as many Weslaco sporting events as she could. In addition to her coaching career, Coach Cleckler spent over a dozen years working at Kickapoo Kamp in Kerrville where she served as the nurse for all the girl campers which included many of her own granddaughters/nieces as well as her students she taught. Weslaco ISD dedicated their new Cleckler-Heald elementary to honor Coach Cleckler and her fellow coach/lifelong friend, Dessie Heald. In 1995, she was also honored to be inducted into the Rio Grande Valley Sports Hall of Fame. One of the most important things to Coach was her love of Christ and her home church, the First United Methodist of Weslaco, where she praised God by singing in the choir for most of her life. She is preceded in death by her husband Cornbread, her parents Gerald and Roberta Madden, her brother, George (Bubba) Madden and her daughter in law Sieglinde Cleckler (Jamie). She is survived by her three sons, James (Jamie) M. Cleckler, Grady D. Cleckler (Elaine) and Gerald B. Cleckler (Kimberly). She is also survived by her siblings- Jerry (Dir) Madden (Mary Anne), Mike Madden, Jay Madden, Phyllis (Kee Kee) (David Russell) and David Madden (Jill). She is also survived by 2 grandchildren, 6 great grandchildren, 24 nieces and nephews, 49 great nieces and nephews and 8 great great nieces and nephews on the Madden and Cleckler side. She cherished her family dearly and loved them all unconditionally. To her family, she was affectionately known as "Nee Nee". Even with all of her many other responsibilities, she always put her family first in all things. Visitation will be held on Wednesday, September 6th, 2017 from 10am to 9pm at McCaleb Funeral Home. Funeral service will be held on Thursday, September 7th, at 10am. Burial will be held on Friday, September 8th, 3pm, at Cook-Walden Capitol Parks in Plugerville, TX. Coach Cleckler will always be remembered as an inspirational, motivational teacher and coach, a caring and loving nurse and wife, and faithful Christian. By far, her most important accomplishment, was raising three boys and being a mom.

Mary Jeanne Madden Cleckler (Coach) passed away peacefully Saturday morning, September 2nd, 2017. She was born in Breckenridge, Texas on February 22nd, 1933 to Gerald and Roberta Madden and was the oldest of 7 children. She married James W.... View Obituary & Service Information

The family of Mary Jeanne Cleckler created this Life Tributes page to make it easy to share your memories.

Send flowers to the Cleckler family.