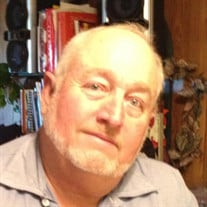 Edinburg-Michael Willard Fike, 68, loving husband, father, granddad, friend, and lifelong resident of Edinburg, passed away Sunday, May 2, 2021, at his home. Michael was the firstborn son to Willard Orin Fike and Anna Rork Fike, born September 12, 1952, in Edinburg, Texas. Michael grew up in Edinburg, where he was active in F.F.A. and also played in the orchestra. After graduating from Edinburg Highschool, Mike attended Pan American University, where he met his soulmate, Karen Turberville, in Biology class. Mike continued farming with his brothers and father while Karen finished school and became a teacher. The couple was married in 1973. Michael and Karen raised three children, Rachel, Daniel, and Joshua. When the boys were old enough, they, along with nephews Matthew and Adam Flike, joined the family farming business. Michael worked from sunrise to sunset and squeezed every drop of daylight out of each day. He was a true outdoorsman. On the rare occasion that he wasn’t working, Michael enjoyed hunting, fishing, and spending time with his grandchildren. Michael was very active in the Edinburg Beef Club and a member of the First United Methodist Church in Edcouch. We were truly blessed to know such a God-fearing, courageous, caring, kind, and loving man. He led by example and raised his children to love God, just as Michael did, walking in faith. Michael lived for his family. He was the first to come to the rescue when his family or friends were in need. Michael is preceded in death by his dad, Willard Fike, and brother, Harry Fike. He is survived by his loving wife, Karen, children, Rachel Villarreal (D.J.), Daniel Fike (Shelly), Joshua Fike (Athena), all of Edinburg, grandchildren, Warren and Woodrow Villarreal, Hannis and Harper Fike, Betsy and Beverly Fike, mother, Anne Fike, and brothers, George Fike (Wendy), and Sam Fike. Visitation will be Wednesday, May 5th, 3-7 pm, with family present from 5-7 pm at McCaleb Funeral Home in Weslaco. A celebration of life will be Thursday, 10 am, at McCaleb Funeral Home in Weslaco, followed by burial at Fike Family Cemetery in Edinburg. Serving as pallbearers will be Jeremy Salazar, Warren Villarreal, Woodrow Villarreal, David Villarreal, Mark Villarreal, and Hunter Fike. Honorary pallbearers will be Hannis and Harper Fike. Contributions can be made in Michael's honor to the Edinburg Beef Club to help F.F.A. and 4-H kids in Edinburg. For more information on how to do this, please call (956) 212-1820.

The family of Michael Willard Fike created this Life Tributes page to make it easy to share your memories.

Send flowers to the Fike family.