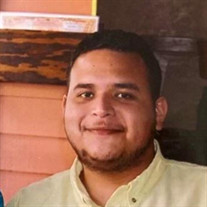 Weslaco: Nicholas "Nick" Garcia, 25, passed away on February 9th, 2022, after a courageous two-year battle with cancer. Nick was the baby of three children born on December 5th, 1996, to Ismael "Smiley" Sr. and Nelda (Garza) Garcia in McAllen, Texas. Nick grew up in Weslaco, and when he was a young child, the family started attending the First Baptist Church in Weslaco, and the church became their second home. Soon, First Baptist Church became more like family and was Nick's second home. Twice a year, the youth group attended a camp, an opportunity that Nick never missed. Nick became a leader and mentor to some of the younger kids as he matured. He always seemed to find a way to keep the diversity of the youth group cohesive, and even though this was not Nick's official role, he felt a duty/responsibility to make sure everyone had a good time. If things got tense, Nick would distract everyone with a funny prank. He was full of laughter and joy, which was infectious. Nick continued to serve throughout his teenage years. He was an asset to the Cristian Youth Basketball League (CYBL) and always ensured everything was ready for the season and the kids. He helped run Vacation Bible School most of his teenage years and even went on trips all over the Rio Grande Valley and Corpus to help underserved churches with their Vacation Bible School. Nick also assisted with the Treehouse Club for children's ministry. Throughout Nick's short time on Earth, he led countless people to Christ through his actions, example, and behavior. Nick never said no when it came to serving for Christ. Nick was baptized and professed his faith in Christ at First Baptist Church when he was a teenager. He loved reminding Joe Aguilar that Joe had to use the “step stool” because Nick was so tall. Nick’s faith never waivered. Nick grew up in Weslaco and attended Weslaco High School where he played football for the Weslaco Panthers. Nick was never afraid of work, and a few years ago, Nick moved to Tennessee to expand his opportunities. He worked at cotton gins, drove farm trucks, and many others. Nick looked up to his father and wanted to become a truck driver, like his father. Nick was always a lover of dad's (Smiley's) food. As a kid, Nick would watch in admiration as Smiley barbecued a perfect meal and constantly asked for a sample. When Nick began living on his own, he would often reach out to Smiley for recipes or cooking advice, and Nick was so proud when he was able to impress his friends for dinner. Nick had had lifelong friends who he loved to hang out with, listening to music, driving around, eating out, or picking up a random basketball game at the park. In addition, Nick enjoyed fishing, hunting, and watching football. He was a die-hard New York Giants fan and he never missed First Baptist Church Fantasy Football League. Nick's team always consisted of all Giant players and he didn’t mind placing last. Nick was selfless, kind, and had a servant attitude. During his illness, Nick worried more about others than himself. He also had a great sense of humor and could lighten the mood with a joke, even when he was in obvious pain. Nick never complained. Instead, he kept a positive attitude and had no doubt where his forever home would be. Nick is preceded in death by his maternal grandfather, Ernesto “Neto” Garza, paternal grandparents, Pedro and Pura Garcia. Nick is survived by his parents, Ismael "Smiley" Sr. and Nelda Garcia, maternal grandmother, Enedina “Nina” Perales Garza, sister, Victoria Nelyssa Garcia, and brother, US Navy Corpsman, Ismael "IJ" Garcia Jr. Visitation will be Tuesday, February 15th, 1-9 pm, at McCaleb Funeral Home. A celebration of life will be Wednesday, February 16th, 11 am, at First Baptist Church in Weslaco. Cremation will be private. Live stream available via YouTube: https://www.youtube.com/watch?v=JlJ-inbLVeA

The family of Nicholas "Nick" Garcia created this Life Tributes page to make it easy to share your memories.