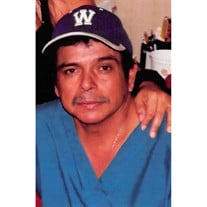 GEORGIA - Noel C. Hinojosa "Shorty", 57, passed away on Sunday, December 10th, 2017 in Thomasville, GA. He was born on March 16th, 1960 to Narciso and Leonor Hinjosa. Noel was born and raised in Weslaco, along with his six siblings. Noel was always a very hard worker and would migrate with his father to Georgia for many years to help support his parents. When he was 27 years old, he met the love of his life in Georgia and his migrating ended immediately. He married the love of his life, Betty Jean, and they spent the next 30 years in Bainbridge, Georgia until her untimely death in 2015. After falling in love, Noel took a job at Delta Tire Company, where he dedicated 29 years of service. Noel was always a hard worker and was admired by many for his dedication and resilience. He rarely missed a day of work. He saved money to buy his own tools so that he could be more efficient at his job. He loaned them out from time to time, but he was always very careful with them. He became very close to his boss, Jeff Lynn, and Lisa Minto, the administrative assistant, who treated him like their own family. He was also very close to his co-workers, who loved Noel. Noel also loved to barbecue and listen to music. He was fun to be around and always had a story that would put a smile on everyone's face. He was very helpful to those in need and an incredibly devoted husband and son. Noel is preceded in death by his wife, Betty Jean Hinojosa, brother, Manuel Hinojosa, his maternal grandparents, Francisco & Nieves Cardenas and paternal grandparents, Manuel and Ambrosia Hinojosa. He is survived by his parents, Narciso G. and Leonor C. Hinojosa of Weslaco, TX, his brothers, Jose Hinojosa (Linda) of San Antonio, TX, Daniel Hinojosa (Heather) of Weslaco, TX, and Narciso J. Hinojosa of Olivia, MN; his sisters, Irma Hernandez (Ricardo) of San Jose, CA., Diana Martinez (Benjamin) of Weslaco, and Elisa H. Zamaniego of Weslaco, TX, 17 nieces and nephews, and 24 great nieces and nephews. Funeral arrangements are under the care of McCaleb Funeral Home of Weslaco.

GEORGIA - Noel C. Hinojosa "Shorty", 57, passed away on Sunday, December 10th, 2017 in Thomasville, GA. He was born on March 16th, 1960 to Narciso and Leonor Hinjosa. Noel was born and raised in Weslaco, along with his six siblings. Noel was... View Obituary & Service Information

The family of Noel C. Hinojosa created this Life Tributes page to make it easy to share your memories.

Send flowers to the Hinojosa family.