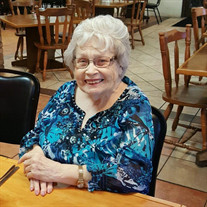 WESLACO, TX — On Saturday, September 12, 2020, Norma Faye Czernicki, passed from this world to the next, surrounded by her loving family and buoyed by their recitation of the prayers of the Chaplet of Divine Mercy: "Jesus, I trust in you." The daughter of the late Wayman and Virginia (Michael) McCarty, Norma was born on July 27, 1934, and raised on a small dairy farm on Nolan's Run in Lumberport, West Virginia. Late in life even as her memory began to fade, she professed love for the Mountain State and life on the farm with her parents, sisters Glenna and Peggy Sue, and cousins, especially first cousins Lois and Betty. She recalled climbing the ridge as a young girl to bring the cows home before nightfall and when she raised the ire of her parents by overfeeding a sheep and by making mudcakes with REAL eggs. Norma's hearing began to fail when she was nine years old. By age twelve she became profoundly deaf and was enrolled at the West Virginia School for the Deaf, making the long trip between Lumberport and Romney alone by Greyhound Bus. She subsequently attended Gallaudet University in Washington, DC, the only liberal arts college for the Deaf in the world, earning a Bachelor's degree in Library Science in 1955. She later completed Master's degrees in Reading (Frostburg State University, 1973) and Library Science (University of Kentucky, 1991). She was the first member of her family to complete college. At the opening icebreaker of her preparatory year at Gallaudet, Norma introduced to her classmates a young man from Wisconsin named Ed whose last name was a challenge to fingerspell. Along with other Gallaudet students, during their junior year, Ed and Norma were recruited to work for the summer at Yellowstone National Park in Wyoming—with Ed washing dishes and Norma serving as a bathroom attendant at Old Faithful Lodge. After their graduation in 1955, Ed and Norma returned to the West and were married in Great Falls, Montana. Norma was employed for over ten years as the chief cataloger at the Great Falls Public Library. Later, Norma was the first deaf person to be hired by the Tennessee Valley Authority in Knoxville, where she served as research librarian for three years. When her father was seriously injured in a fall, Norma returned to her alma mater in Romney in 1968 to teach reading and later serve as librarian. After Ed's sudden passing in 2000, Norma retired from WVSD with 32 years of service and months later was hired by the Hampshire County Public Library, where she worked until 2012. She particularly enjoyed assisting patrons with genealogical research. She said that working at the public library was an epiphany for her: After living in Romney for over thirty years, when patrons recognized her and waved to her around town, she finally felt like she was part of the community. Norma had a great love for the Deaf Community: her lifelong friends from WVSD and Gallaudet; Phi Kappa Zeta Sorority and the round-robin correspondence she maintained with her sorority sisters for over fifty years; the West Virginia Association of the Deaf; and Deaf Seniors of America. In 2015, she was inducted into the WVSD Hall of Fame for her "dedication to the WVSD community and strength of character." Although she was raised a Southern Baptist, Norma converted to Catholicism as an adult and remained devout for the rest of her life. She utilized her bibliothecal skills to organize, catalog, and maintain the parish lending library at Our Lady of Grace Catholic Church in Romney. Thanks to the camaraderie of Gary Galloway's Western Maryland travel group, Norma was able to achieve a lifelong dream of extensive international travel, touring such locales as Budapest, Hungary (her favorite); Krakow, Poland; Venice, Italy; Australia and New Zealand; and the Great Wall of China. Residing with her daughter and son-in-law and being actively involved in the lives of her three grandchildren for over two decades gave her life meaning. Norma is survived by her sister Peggy Sue Allen of Mt. Clare, WV; daughter Marla and her son-in-law John Garlic of Weslaco, TX; daughter Paula of Many Farms and Flagstaff, AZ; grandson 2Lt Dmitri Garlic of Ft. Benning, GA; granddaughters Kyrie and Ariana of College Station, TX; numerous nieces and nephews in WV, MI, and WI; and ever-faithful canine companion Angel. The family extends sincere thanks to Elida Sanchez of Donna, TX, for all of her thoughtful and gentle care over the past seven years. Due to COVID-19, there will be no public service. A Celebration of Life will be held at a later date (post COVID!) in Romney, WV. Norma bequeathed her temporal bones and brain to the National Temporal Bone Registry of Mass. Eye and Ear, a teaching hospital of Harvard Medical School. For those of us left behind who have been touched by her unfailing empathy, generosity, and tenacity, may we see life's challenges as opportunities and be reminded of the blessing and example of Norma.

WESLACO, TX &#8212; On Saturday, September 12, 2020, Norma Faye Czernicki, passed from this world to the next, surrounded by her loving family and buoyed by their recitation of the prayers of the Chaplet of Divine Mercy: "Jesus, I trust in... View Obituary & Service Information

The family of Norma Faye Czernicki created this Life Tributes page to make it easy to share your memories.

Send flowers to the Czernicki family.