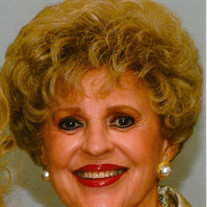 At 96, Norma “Ann” Round passed away peacefully in Weslaco, Texas, at the John Knox Health Center on January 26, 2022. On August 30, 1925, Ann was born in Hoisington, Kansas, to Tillie and Julius Reif. She grew up in Kansas and did all her schooling there. Ann had three sisters, Aileen Oliverius (Melvin), Ethel Schwein Hickey (Ben), and Loraine Schwein Younger (Al), which all predeceased her. At the age of 20, she married Charles Foresman. In 1963, she and Charles moved to the Rio Grande Valley to join a partnership in the construction business. Ann went to work for Sanborn’s Mexico Insurance and Travel Agency, which led to a 37-year career. When Charles died in 1965, Ann decided to stay in the Valley. Her Sanborn’s employment led to the development and fulfillment of a passion for traveling worldwide—from Central and South America to Europe and Asia. She became an active member of the McAllen Chapter of Beta Sigma Phi during those years. In 2002 she married Ronnie Round. They shared great love and devotion. After living in McAllen for a few years, they built a home in John Knox Village of Weslaco, TX. This new move came with a blessing, a very active social life. Ann and Ronnie enjoyed meeting new friends, enhancing relationships with old friends, playing bridge, and participating in non-stop social events. Ann also became an active member of the Weslaco PEO Chapter BW and the Mid Valley Book Club. Ann always loved corresponding and getting photographs of her grandnieces and nephews. She also loved dancing, horseback riding, and needlepoint. Ann is predeceased by her parents, sisters, and niece, Kimberly Schwein Spickard. Ann leaves behind the love of her life, husband, Merrill D. “Ronnie” Round of Weslaco, TX, her stepdaughter, Melodye Scoggins (Jackie) of McAllen, TX, nephews Rickey Schwein (Lynda) of Rio Hondo, TX, and Leland R. Schwein ( Sunday) of Payson, AZ, grand nephews and nieces Mike Schwein, Curt Schwein, Kerry Jayne, Debbie Schwein Perkins, Tammy Schwein Rowland, and Chad Schwein. And last but not least, her best long-time friend Molly Sheperd (Kent) of Mission, TX. We thank the John Knox Village Health Center staff for their outstanding care and compassion towards Ann while she was there. Our special thanks go to the loving, faithful, and devoted long-time caretakers, Eva Cavazos and Maria Mendoza. According to her wishes, Ann's remains will be buried alongside her parents in Hoisington, KS, after being cremated. In her memory, donations can be made to the Fellowship of Christian Athletes, 910 Harvey St, McAllen, TX 78501.

The family of Norma "Ann" Round created this Life Tributes page to make it easy to share your memories.

At 96, Norma “Ann” Round passed away peacefully in Weslaco, Texas,...

Send flowers to the Round family.