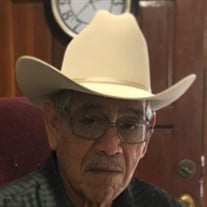 Pedro L. Carmona was born December 9, 1945, in Weslaco, Texas, to Juan Carmona and Eufemia Lopez Carmona. Pedro was the second to the youngest, raised with five brothers and two sisters. He learned the value of a hard day's work at an early age. Pedro and his family were migrant workers and spent summers working all over the United States. Pedro's family was working in Colorado when he met the love of his life, Santos Ramon. The couple was inseparable from that time forward. Pedro and Santos were married on November 24, 1962. During their fifty-five years of marriage, Pedro and Santos raised their five children, Diana, Pedro, Sylvia, David, and Rene, in Weslaco. Pedro was a truck driver, and Santos worked along his side to make sure his business was a success. Pedro hauled grain for a company at San Benito every year where his two brothers, Jose and Juan, would join him. He loved spending time with his brothers doing the same kind of work. Those long road trips were precious bonding time for Pedro and his brothers. After retiring from his own trucking business, Pedro worked for Weslaco ISD as a bus driver. Pedro loved hunting and fishing, but most of all, he loved to collect a variety of guns. He couldn't wait for the hunting season to start. He made sure he had his gear ready for the season. Besides hunting and fishing, he had a healthy collection of CB radios that he used to communicate with his friends from Mexico to California and around the Rio Grande Valley. He was known as "El Venadito" by his friends. He made sure he spent time with Brownie, his chihuahua, Bear, his huskie dog, ducks & geese, and his parakeets in his spare time. Pedro accepted the Lord as his personal savior two years ago. He loved to listen to Radio Vida during the Day. Pedro deeply loved his life here on Earth and spending time with his children and grandchildren, but he dearly missed his wife. Pedro is now reunited with the love of his life, Santos, his parents, Juan and Eufemia Carmona, brothers, Jose Carmona Sr. (Maria), Juan Carmona Jr., Antonio Carmona, sisters, Sarah Vela (Felix), and Rebeca Carmona. He leaves behind five children, Diana Carmona-Gonzalez (Jose Gonzalez Jr.), Pedro Carmona Jr., Sylvia Silva (Pedro Silva Sr.), David Carmona Sr. (Leticia Caballero) and Rene Carmona Sr. (Maria Del Carmen), brother, Manuel Carmona (Maria), sisters in law, Rosa and Josefa Carmona, eleven grandchildren, Iliana Rodriguez (Erik), Pedro Silva Jr.(Julie), Sarah Lee Silva (Jordan) , Pedro Carmona III, Rene Carmona Jr (Ashley)., David Carmona Jr., Corina Carmona, Christopher Carmona, Michael Alexander Carmona (Daisy) , Jason Iram Carmona, and Richard Anthony Carmona, and sixteen great-grandchildren, numerous nephews and nieces. Pedro will be dearly missed by all who knew him. His children and grandchildren adored him.

Pedro L. Carmona was born December 9, 1945, in Weslaco, Texas, to Juan Carmona and Eufemia Lopez Carmona. Pedro was the second to the youngest, raised with five brothers and two sisters. He learned the value of a hard day's work at an early... View Obituary & Service Information

The family of Pedro L. Carmona created this Life Tributes page to make it easy to share your memories.

Send flowers to the Carmona family.